There is no international law in UAE: Mir-Qolikhan

Iranian national Shahrzad Mir-Qolikhan, who spent five years in US detention from 2007 to 2012, describes the United Arab Emirates (UAE) government as the country where there is no international law, Press TV reports. 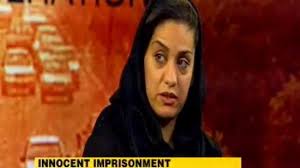 In a Press TV documentary, entitled "Memories of a Witness: Inside US Federal Prisons," in which she recounts her ordeal, Mir-Qolikhan, 36, said the worst thing about the Persian Gulf littoral state is that the government would make an abrupt decision, and compels you to leave the country without providing any clear explanation.
"You can go as an investor to that country. You invest billions of dollars. But at the end of the day, the government would decide something out of the blue within a blink of an eye. They just shut down everything. They just take over whatever you have and the property. They just kick you out of the country,” Mir-Qolikhan said in the documentary.
She went on to say that she has no idea why the UAE authorities forced her to shut down her company Twin Group Television Productions despite the fact that she had not committed any wrongdoing in the Arab country.
Mir-Qolikhan said she received a letter on July 19, 2005, asking her to resolve her company’s registration and shutter it.
The Iranian national said she hired a lawyer and spent hundreds of thousands of dirhams to reverse the UAE government’s decision but all to no avail.
Mir-Qolikhan added that at last Emirati officials set a deadline of 24 hours and asked her and her children to leave the country, and leave their belongings behind.
"They called me and they said you have 24 hours to pack your properties, remove your children from school, get everything and you will be deported from the UAE. We packed up properties. I just left everything… I can’t tell you how the UAE government has tortured me and my children,” she noted.
Mir-Qolikhan further noted that when she sought to sell up her property in the UAE while she was staying in Cyprus, Emirati authorities demanded two certificates of clearance, one from Iran and another one from the United States, to give her visa to enter the UAE.
She received a certificate of clearance from Iran, and for the American one she contacted the US Embassy in Cyprus. The embassy refused to give her the certificate, citing that she was not eligible to get it because she had not ever been in the United States and she was not a US citizen.
When Mir-Qolikhan went to the immigration office in Cyprus to renew her visa, Cypriot officials refused. They said her name was blacklisted and there was an arrest warrant for her. Since she could not apply for a visa or license to establish her business in Cyprus, she had no option to travel to the United States to clear her name.
Americans told her that it would take only 10 days to remove her name from the blacklist, so she boarded a plane and flew to Miami.
Mir-Qolikhan was arrested in the US in December 2007, after flying to the States from a vacation in Cyprus to clear her name.
Her former husband, Mahmoud Seif, had allegedly tried to export night-vision goggles to Iran from Austria. However, she was detained and sentenced to five years in prison by a Florida federal court in the absence of her husband.
Mir-Qolikhan said that she had suffered brutal torture in US prisons.
Share to
Tags
MirQolikhan ، US ، UAE ، human rights
Your Comment