Tehran, YJC. 70 pct. disabled veteran of Iraq-Iran war has asked for a meeting with Catherine Ashton to discuss a number of human rights issues. 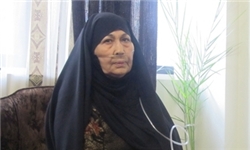 Amineh Vahab Zadeh is a veteran from the Iraq-Iran war with 70 percent disability.

She was disabled under chemical attack by the Iraqi army while helping the front as a rescue member. For her command of Arabic she also used to accompany some of the Iranian commanders on their reconnaissance operations.

"As I heard that the EU Foreign Affairs official is interested in human rights, having announced that such issues matter to her, I thought that meeting and hearing the victims of unconventional weapons which were provided for Saddam by the member states of the Union would have counted as one of the points to be gained from her trip to Iran,” Vahab Zadeh said.

She stated "I intended by such a meeting to explain my circumstances in these years of suffering and to find out the reason why chemical weapons were given to Saddam by Germany and some other European countries.”

Maintaining that her requests follow human rights concerns, she asked if she could disclose herself to Mrs. Ashton face to face and express her complaint as a woman who has been victimized by European weapons while defending her country.

"Years ago Mrs. Ashton’s political friends provided Saddam with chemical weapons so that he could attack Iran more strongly. Now she can come and have a close look at what the Western human rights have done,” she added.