Experts warn that any resolutions from UN are unlikely: When big powers in the Security Council are at loggerheads, the UN has always proved to be politically impotent.
A number of UN Security Council members warned against the decision of holding a referendum on the status of Crimea next Sunday, March 16th, Turkish official news agency (AA) reported. 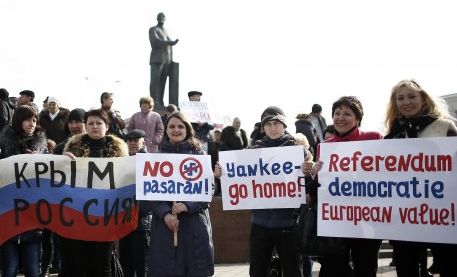 Some members consider the decision to be "contrary to the Constitution of Ukraine and therefore illegal,” Sylvie Lucas, the President of the UN Security Council and Luxemburg’s ambassador told reporters following the closed meeting of the Council on Monday.
Lucas added that the resolution to the Ukrainian crisis should be based on the UN Charter. Council’s members also welcome the efforts of the Organization for Security and Cooperation in Europe (OSCE) to establish a monitoring mechanism, which would have unhindered access to international monitors.
Yet, at the UN Headquarters, countries with veto powers including Russia, U.S., United Kingdom and France and China continue to clash over the issue.
"As things stand, it is very unlikely that any resolution to the crisis in Ukraine would even remotely come from the UN or Security Council," Thalif Deen, a UN based political analyst and Inter Press (IPS) UN bureau chief told Anadolu Agency (AA).
"When two big powers in the Security Council are at loggerheads, the UN has always proved to be politically impotent,” cautioned Deen.
He maintained that there is no effective UN solution, despite the efforts of the UN Secretary General and his team on the ground. Deen expressed his opinion that international sanctions will not be imposed, but sanctions may come from the U.S. firstly and possibly by the European Union to a lesser extent.
UN Secretary General Ban Ki-moon also said Monday that he was "increasingly alarmed by the developments in Ukraine.”
He appealed to the international community to help calm the situation in Ukraine sooner rather then later: "At this crucial juncture, we cannot afford either miscalculations or inaction,” he said.
In the meantime,  Ban asked his Assistant Secretary-General for Human Rights, Ivan Simonovic, to continue his mission to Ukraine until March 15th where he will assess the human rights situation and make recommendations to Ban for "further action.”
The UN said Simonovic already has held meetings with the new Ukrainian Foreign Minister, the ombudsperson, and many foreign diplomats in Kiev, including the representatives of civil society and the international organizations. He is scheduled to travel to Crimea also.
Previous UN special envoy to Ukraine and former Dutch Ambassador to Ukraine, Robert Serry, last week ended his mission in Crimea after a threatening incident in which he was stopped, allegedly by approximately 15 armed Russian men, reportedly shouting the name of Russia's President Vladimir Putin around the UN's envoy car.
Despite the adverse reactions and many international warnings, Russian troops have been deployed in Ukrainian Crimea since last month, against the backdrop of protests and violence that have started last November in Kiev and other Ukrainian cities.