Ukraine's acting president has said the country will not use its army to stop Crimea from seceding, the latest sign that a Russian annexation of the strategic peninsula may be imminent. 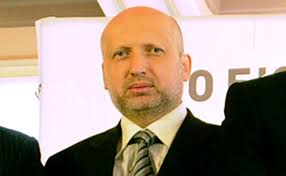 Oleksandr Turchynov's Tuesday comments came after the Crimean parliament voted for independence ahead of a referendum on joining Russia, while Washington and Moscow locked horns in one of their fiercest clashes since the Cold War.

The interim leader said intervening on the southeastern Black Sea peninsula, where Kremlin-backed forces have seized de facto control, would leave Ukraine exposed on its eastern border, where he said Russia has massed "significant tank units".

"We cannot launch a military operation in Crimea, as we would expose the eastern border and Ukraine would not be protected," Turchynov told AFP.

"They're provoking us to have a pretext to intervene on the Ukrainian mainland... (but) we cannot follow the scenario written by the Kremlin."

Sunday's referendum is being organised by Crimea's self-appointed leaders, who are not recognised by the new pro-European government in Kiev, installed after three months of protests that resulted in 100 deaths and the ouster of pro-Russian president Viktor Yanukovych.

Conversely, Turchynov is not recognised by Moscow, which still insists Yanukovych is Ukraine's legitimate president.

Turchynov described the secession referendum as a "sham" whose outcome would be decided "in the offices of the Kremlin".

World powers have repeatedly called for Moscow and Kiev to come together to seek a solution to the escalating crisis, but Turchynov said Russia's leaders were refusing any such talks.

"Unfortunately, for now Russia is rejecting a diplomatic solution to the conflict," he said.

Western powers, led by the US and Germany, insist that forming an "international contact group" is the way out of the crisis over the culturally fractured ex-Soviet state, which erupted into protest after Yanukovych pulled out of a deal on closer ties with the European Union in favour of a now-frozen bailout from Russia.
- Obama hosts new PM  -
=======================
Turchynov's comments came as Ukrainian Prime Minister Arseniy Yatsenyuk headed to the White House for a meeting Wednesday with US President Barack Obama that should add credibility to his untested team.

Yatsenyuk will also use the visit to iron out the details of a $35-billion aid package he says his country's teetering economy needs to stay afloat over the next two years.

The European Union has also announced trade breaks worth 500 million euros ($690 million) that could ease Ukraine's burden from restrictions that Russia has threatened in response to Kiev's tilt toward the West.

The White House is leaving no doubt about the message it intends to send Russia with the visit.

Yatsenyuk will be treated like any other foreign leader visiting Washington, and be greeted by Obama in the Oval Office -- a symbol of US power -- for talks and a short photo opportunity at which both men will make remarks.

Washington says the reception for Yatsenyuk is intended to show that it believes the interim government in Kiev has been playing a responsible role since Yanukovych fled to Russia.

"We strongly support Ukraine, the Ukrainian people and the legitimacy of the new Ukrainian government," White House spokesman Jay Carney told reporters Tuesday, when asked what message Obama was trying to send Moscow.

At the same time, and despite the apparent impasse in diplomacy between Russia and the United States on Ukraine, Carney stressed that the White House was still offering the Kremlin an "off ramp" in the crisis.

Russia's top diplomat Sergei Lavrov and US Secretary of State John Kerry failed again Tuesday to bridge differences on resolving the crisis in a phone conversation, with no decision yet made on whether Kerry would take up an invitation to meet with President Vladimir Putin in Moscow, the State Department said.

The peninsula of two million people had always enjoyed wide autonomy and was part of Russia until being given to Kiev as a symbolic "gift" in 1954, when Ukraine was still part of the Soviet Union.

Kiev's hold on the separatist region loosened still further Tuesday when pro-Kremlin gunmen seized the air traffic control tower at Crimea's main international airport and cancelled all flights except those to and from Moscow.

The region's self-declared rulers are now recruiting volunteers to fight Ukrainian soldiers, while the Russian government sent lawmakers a draft bill that would simplify the Kremlin's annexation of Crimea after Sunday's vote.
- Congress increases pressure -
===============================
The US Congress demanded Tuesday that Russia immediately withdraw from Ukraine and urged Obama to impose punitive economic sanctions on Moscow.

The Senate expressed its support for Ukraine by passing strongly worded resolutions, using tough language against Russia and urging it be suspended from the Group of 8 world powers.

The measure also called on world football governing body FIFA to reconsider its decision to hold the 2018 World Cup in Russia.