Japan and the United States are trying to arrange a summit meeting with South Korea later this month when the countries' three leaders show up for an international conference on nuclear security later this month, news reports said Wednesday. 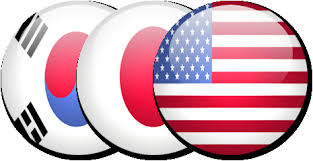 It remains unclear whether South Korean President Park Geun Hye would be willing to sit down with Japanese Prime Minister Shinzo Abe at the conference in the Netherlands amid strained bilateral ties, the Kyodo News agency reported, citing unnamed Japanese government sources.
The three leaders would be expected to discuss how to cooperate on the issue of North Korea's nuclear and missile threats, Kyodo said.
Ties between Japan and South Korea have been badly frayed over a territorial spat and the issue of wartime sexual slavery.
Abe has denied the Imperial Japanese Army's responsibility for its wartime sexual slavery before and during World War II, in which many of the victims were Korean women.
In August 2012, Tokyo was angered by then-president Lee Myung Bak's visit to a group of disputed islets controlled by Seoul but also claimed by Tokyo.
DPA
Share to
Tags
South korea ، Japan ، US ، Park
Your Comment