Tehran, YJC. The Haft Seen is a special table arranged for the New Year in Iran. It comes down from olden times. 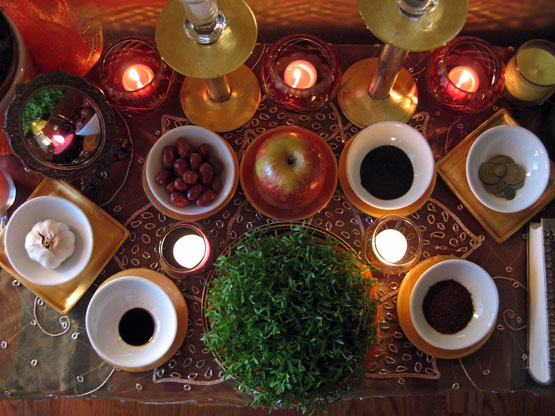 The Haft Seen is the salient feature of Iranian homes at the New Year
No-Rooz as a festival is symbolically celebrated by arranging seven items on a green tablecloth. In Yazd and Kerman, where the Zarathushties were concentrated in Iran, upto the 1940's they laid seven trays, in which they put various items that were available to the family. Most of them stood either as a sign of thanks giving for its abundance in the past year or for a wish for its abundance in future. Of significance were the seven trays (Seene). Today in Iran seven items that start with the letter Sheen (Sh) or Seen (Se) are arranged. The Muslims use items starting with Seen because they cannot place wine (SHarab) on the table. In either case the items have philosophic meanings, which are not necessarily known to all the people. They do it as a tradition. Those who know the meaning may only know a version of the new philosophic meanings but not the real ancient ones. The new meanings are the ones that have been repeated over and over again to disguise the real ones and thereby making it possible to preserve the ancient Zarathushti culture and custom in Islamic Iran on a national level.
Like many other things not only was the real symbolic meaning behind the seven trays disguised but even SHeen was changed to SEen so that wine (SHarab) could be replaced by vinegar (SErkeh) and the tradition preserved. A few generations having gone by the Zarathushties of today have also lost the real ancient meaning and significance of this culture and have started believing in some version of the new philosophic meanings given to the seven items. So while scholars are busy discussing if Sheen is correct or Seen the grocery shops make a few extra bucks selling both those items.
With a view to the fact that in the near past seven trays were placed with any number of items in them, and these days we have seven items starting with Sheen or Seen, and the bas-relief's at Takht-e Jamshid (Persipolis) depict seven people from each country carrying No-Rooz gifts, shows the importance of SEVEN.
The real significance of seven was to represent the "Seven Eternal Laws", which embodies the Teachings of Zarathushtra. It was a way of preserving and a reminder of the teachings of Zarathushtra.
The ancient meaning of the "Seven Eternal Laws" in summary form is as under:
The celebration itself begins on the stroke of the clock indicating the time of the equinox and lasts for the next 21 days. To begin with, a fire or a lamp, or a candle is lit; prayers are said and the members of the family sitting round the table greet each other by sprinkling rose water and showing each other a mirror. Usually they say, 'May you be as fragrant as the rose and as bright as the mirror.' Then the elders give the others members of the family their blessings and gifts. With view to the fact that the equinox is at different hours of the day each year, the sequence of programs may differ. In any case, at the next appropriate moment, a visit is paid to the Temple where prayers are recited and then a visit is made to the house of the elders in the family, where usually the kids get their gifts. Zarathushties believed in enjoyment and making the best of life and any and every occasion was taken advantage of, thus visiting friends and family, parties and function continue for the first 21 days of the New Year.
From Iran Chamber Society
Share to
Tags
haft ، seen ، norooz ، new ، year ، culture
Comments
Published: 1
Under Review: 21
Wilbert
|

|
0
0
Answer
Thanks for finally talking about >Haft Seen, the New Year table
Your Comment