Tehran, YJC. Javadi says prophets would use weapons only for defense. 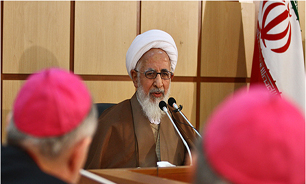 Meeting high-ranking members of the U.S. Council of Catholic Bishops in Qom, ayatollah Javadi Amoli stated "All prophets were against mass destruction weapons.”

"All of us monotheists who have adopted the prophets’ principles have to take the ways of the Abrahamic prophets as our document,” he asserted.

The science which God taught David was how to weave armors. God said we gave David the power to mellow iron and he would do so with his hand. David did not use the power except for making defense weapons. He never thought of using this divine power into making daggers, swords, arrows, spears, or personal or mass destructive weapons, the ayatollah stated.

He further stated "The burning of Galileo was a bitter experience. Burning Galileo in the past and burning the Quran today are indicative of lack of regard for the realities of religion.”

"In the two world wars which broke out in the West, if Christianity had played an active role in following on the path of Jesus Christ, coupling promotion with education and self-preservation, no war would have ever struck,” Javadi Amoli said.

He also pointed out to recent developments in Crimea and said "It is a pity that the West keeps talking democracy while it has its hand on the nuclear trigger. If a third world war breaks out no one will remain alive.”

"Islamic and Christian scholars have to think something about the lives of these people. Two superpowers confront each other for nothing. We all have to carry out the promotional, educational role we have.”

"May making mass destruction weapons become banned and the countries that have them destroy them so that we may have sensible lives,” he expressed hope.