US congress urges Obama to put more pressure on Iran

An overwhelming majority of US lawmakers Tuesday demanded President Barack Obama hold the line on Iran, as a permanent agreement regarding the Islamic republic's contested nuclear program is under negotiation in Vienna. 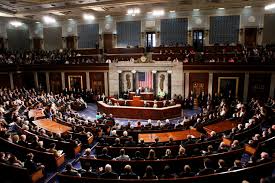 In bipartisan letters, House and Senate members sent wish lists to the president specifying what they wanted to see in any final deal, namely that Iran never gain ability to build a nuclear bomb.

Topping the list of "core principles" sought by  83 of the Senate's 100 members was their demand that Iran not have the right to enrich uranium -- a position rejected by Iranian officials.

"We believe that Iran has no inherent right to enrichment under the Nuclear Non-Proliferation Treaty, (and) we believe any agreement must dismantle Iran's nuclear weapons program and prevent it from ever having a uranium or plutonium path to a nuclear bomb," they said in a letter to Obama.

"We must signal unequivocally to Iran that rejecting negotiations and continuing its nuclear weapon program will lead to much more dramatic sanctions, including further limitations on Iran's exports of crude oil and petroleum products."

Some 394 of the House's current 432 members wrote a similar letter, warning Obama that Iran's "history of delay, deception, and dissembling on its nuclear program" raise concerns that Tehran will seek to secure an "economic lifeline" out of prolonged negotiations while progressing toward nuclear breakout capability.

But while the House also said Tehran would have to "abandon pursuit of a nuclear weapon" if it wanted further sanctions relief, the congressmen sounded open to a civilian nuclear program for Iran.

"We do not seek to deny Iran a peaceful nuclear energy program, but we are gravely concerned that Iran's industrial-scale uranium enrichment capability and heavy-water reactor being built at Arak could be used for the development of nuclear weapons."

The six world powers including Russia and the United States temporarily put aside differences over the Ukraine crisis to meet Tuesday in Vienna for a second series of meetings aimed at transforming the interim deal into a lasting accord by July.

Iran signed on to the temporary agreement January 20 in exchange for sanctions relief from the West.

The US Congress has passed several sets of Iran sanctions, and many lawmakers support stalled legislation that tightens penalties if Iran violates the interim deal or abandons negotiations.

House members, noting that any long-term sanctions relief would require congressional action, urged Obama to "consult closely with us so that we can determine the parameters of such relief in the event an agreement is reached," or consider additional penalties if the deal crumbles.