TEHRAN, Apr 19 - French President Emmanuel Macron is hosting officials from the United Nations' cultural agency, where he is expected to set out ideas for the reconstruction of Notre Dame Cathedral. 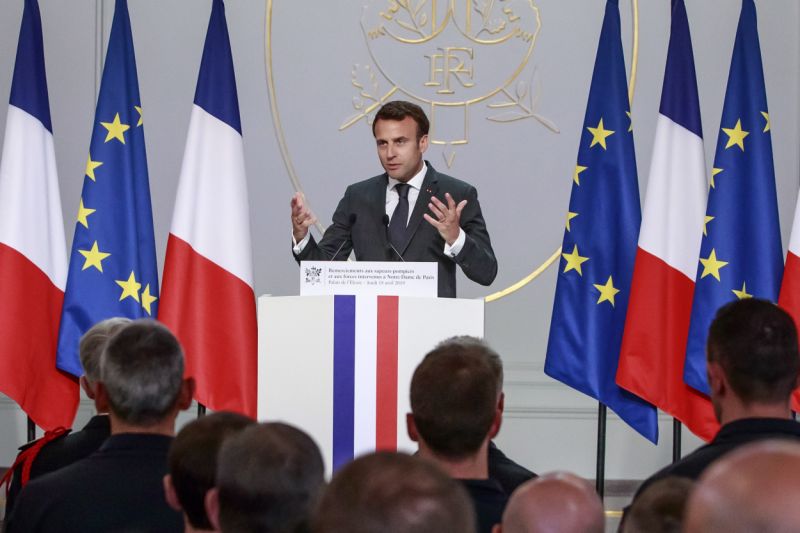 TEHRAN, Young Journalists Club (YJC) - He will meet with state delegates from UNESCO, which oversees global heritage issues, in the Elysee Palace Friday.

Macron's push for a speedy rebuild indicates he wants the fire-ravaged monument's reconstruction to be part of his legacy, and is seizing the moment to try to move on from the divisive yellow vest protests.

His initial wish for it to be rebuilt in just five years was met with incredulity.

Macron had been due to deliver an uneasy speech Monday setting out long-awaited plans to quell anti-government protests that have marred his presidency, but it was postponed after the fire broke out.

Instead, the French leader immediately went on the scene of the fire and announced: "We will rebuild Notre Dame."

According to an opinion poll by BVA institute published Friday — the first one carried out since the fire — Macron gained three points in popularity, from 29 to 32% compared to last month. It places him at a level equivalent to last September, before the yellow vest crisis, BVA said.

All French polls show that Macron's popularity have hovered around low levels for more than a year — they started plunging when he applied a tax rise on retirees.

Yet the same pollsters predict that Macron's party may be ahead in May 26 European Parliament elections, in close competition with the far-right party of Marine Le Pen, the National Rally.

The French leader is now expected to detail his measures to respond to the yellow vest protests next week.

According to the text of his pre-recorded speech, Macron was planning to respond to demonstrators' concerns over their loss of purchasing power with tax cuts for lower-income households and measures to boost pensions and help single parents.

A new round of yellow vest protests is planned on Saturday across the country, including in Paris.

Even the reconstruction of the cathedral will not provide the French leader with a topic for consensus, as experts and politicians debate whether to build it exactly as it was, or whether to introduce new technologies and designs.

Macron's office said that since the collapsed spire wasn't part of the original cathedral, "the President of the Republic wants ... a contemporary architectural gesture to be considered."