TEHRAN, Apr 20 - Jerrie Cobb, the first woman in the world to complete U.S. astronaut training in the early 1960s, has died at the age of 88, her family said. 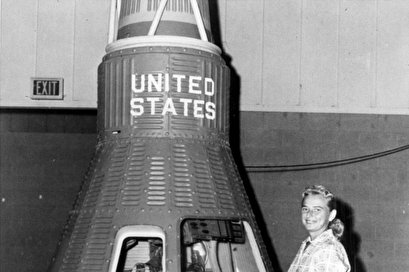 TEHRAN, Young Journalists Club (YJC) -Cobb -- a record-setting pilot before she joined NASA for an astronaut training program with 12 other women, dubbed the "Mercury 13" -- died March 18, but it wasn't announced by a family spokesman until Thursday.

NASA ultimately ended the First Lady Astronaut Training program, choosing instead to send only men into space. Cobb remained an advocate for female pilots and astronauts to the point she once argued for opportunities for women in space program with famed astronaut John Glenn during a 1962 Senate committee hearing. Glenn said at the time, "the fact that women are not in this field is a fact of our social order."

"It is inconceivable to me that the world of outer space should be restricted to men only, like some sort of stag club," fellow "Mercury 13" member Jane Briggs Hart said at the time.

"It's not a case of whether we need them; but whether we can keep them out," then-Pennsylvania Rep. James Fulton added. "Women are storming the battlements of space. We men might as well quit struggling and let them in."

Born Geraldyn Cobb in Oklahoma in 1931, she earned a pilot's license at 16 and logged over 7,000 hours of flying time when she was chosen to take a space stress test. The 1959 tests were done in secrecy, since astronaut candidates were required to be military test pilots at the time. In 1961, she became the first member of the group to pass all phases of testing.

NASA shut down the program in 1962, and Cobb and the other 12 fought the closure in Congress. She testified at hearings that investigated whether NASA discriminated against women.

"As pilots, we fly and share mutual respect with male pilots in the primarily man's world of aviation," Cobb testified. "We see, only, a place in our Nation's space future without discrimination."

After four years with NASA, she flew a number of humanitarian missions for the next four decades in the jungles of South America. She was nominated for a Nobel Peace Prize in 1981 and was honored by four South American countries.

Despite the 1964 space flight by the Soviet Union's Valentina Tereshkova, NASA did not put a woman in space until astronaut Sally Ride rode the Space Shuttle into low Earth orbit in 1983.