TEHRAN, Apr 23 -"This is the first time we've been able to document site fidelity to habitats in offshore waters along the East Coast," researcher Avery Paxton said. 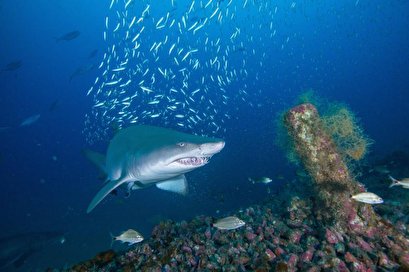 A survey of photographs taken by citizen scientists revealed multiple visits by the same female sand tiger sharks at the same shipwrecks, or similar nearby shipwrecks. The intervals in between visits ranged from one to 72 months.

The study, published this week in the journal Ecology, suggests the shipwrecks are important habitats for the vulnerable species.

"Their population is estimated to have dropped by as much as or more than 75 percent in the 1980s and 1990s and we don't know if it has stabilized or is still declining, in large part because we've mostly had to rely on anecdotal sightings," Avery B. Paxton, a visiting scholar at the Duke University Marine Laboratory, said in a news release. "Having photographic evidence that these wrecks form an important habitat the sharks return to from time to time gives us a focal point for ongoing research so we can better understand how the species is faring."

Scientists aren't sure why the female sharks regularly return to the same shipwrecks. It's possible the sharks are using the sites as rest stops on their migrations. The females could also be coming to mate or give birth.

Because each sand tiger shark has a unique pattern of brown spots, a fingerprint of sorts, scientists can easily recognize individual sharks. Scientists spotted six repeat shipwreck visitors among images in the Spot A Shark USA database, which is managed by North Carolina Aquariums.

"This is the first time we've been able to document site fidelity to habitats in offshore waters along the East Coast," Paxton said. "Previous studies have shown similar behavior patterns in Australia and Africa and in estuarine habitats such as Delaware Bay, so what we are finding off North Carolina definitely fits into global patterns."

Males may also be regularly visiting the same shipwrecks, but so far there's not photographic evidence.

Studying small and elusive populations of sharks is difficult, but by collaborating with divers and citizen scientists, researchers can gain insights into the movement patterns and behaviors of vulnerable species like the sand tiger shark.