TEHRAN, Apr 24 - Dozens of Palestinian demonstrators called on the United Nations to put an end to the Tel Aviv regime’s tight blockade on the Gaza Strip, which has been in place against the impoverished coastal enclave for more than a decade. 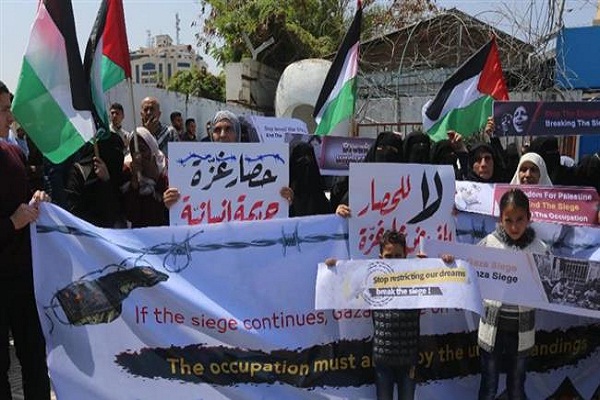 TEHRAN, Young Journalists Club (YJC) - The protesters converged in front of the UN office in Gaza City on Tuesday, waving national Palestinian flags and carrying banners in condemnation of the Israeli siege. They called for an international intervention to end the blockade.

The Highest Commission of the Great March of Return and Breaking the Siege, which had organized the demonstration, said in a statement that the siege must be lifted as soon as possible.

“The weekly marches of return will go on until the siege is immediately lifted,” the statement said, according to Press TV.

Sami Ammassi, chairman of the Palestinian General Federation of Trade Unions, who joined the protest, told reporters that the rate of unemployment in the Gaza Strip exceeded 54 percent and poverty rates hit 80 percent.

“We call on the United Nations and the international organizations to press Israel to lift the blockade that had critically affected all aspects of life,” he said, adding, “We also call on the Arab League to help end Gaza people's sufferings.”

Palestinians have held weekly rallies along the Gaza border to protest the siege on the enclave and demand the right for refugees to return to their homes they fled during the 1948 creation of Israel.

The Gaza clashes reached their peak on May 14, 2018, on the eve of the 70th anniversary of Nakba Day (Day of Catastrophe), which coincided with a US decision to relocate its embassy from Tel Aviv to occupied East Jerusalem al-Quds.

On June 13, 2018, the United Nations General Assembly adopted a resolution, sponsored by Turkey and Algeria, which condemned Israel for Palestinian civilian deaths in the Gaza Strip.

It called for “immediate steps towards ending the closure and the restrictions imposed by Israel on movement and access into and out of the Gaza Strip.”