TEHRAN, May 01 -Scientists estimate the ancient nova remnant was spotted by Chinese astronomers in the year 48 BC. 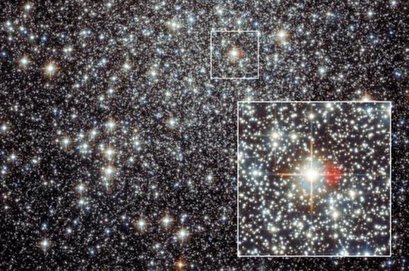 TEHRAN, Young Journalists Club (YJC) - An international team of astronomers has identified the ancient remains of a nova inside a galactic globular cluster.

Using the Very Large Telescope's MUSE instrument, scientists located the deceased stellar core glowing near the center of globular cluster Messier 22, which is found inside the constellation Sagittarius, 10,600 light-years from Earth.

When a nova is ignited, the hydrogen explodes off the surface of the star, leaving behind a brighter stellar envelop. The brightness of a remnant left behind by a nova can last for a several centuries.

Astronomers estimate this particular nova was initially spotted some 2,000 years ago.

"The position and brightness of the remains match an entry from 48 BC in an ancient collection of observations by Chinese astronomers," Fabian Göttgens, researcher at the Institute for Astrophysics at the University of Göttingen, said in a news release. "They probably saw the original nova in the same place."

Messier 22 is an elliptical globular cluster, which is a large amalgamation of stellar clusters, each home to hundreds of thousands of ancient stars.

The Southern European Observatory's Very Large Telescope and its MUSE instrument are especially good at separating and measuring the brightness of different colored light. As such, MUSE is helpful for locating nebulae, which usually appear a bright red.

Because the nova explosion was so powerful, it is large -- boasting a diameter 8,000 times the distance between Earth and the sun -- but light and sparse. The nova boasts a mass just 30 times greater than Earth.