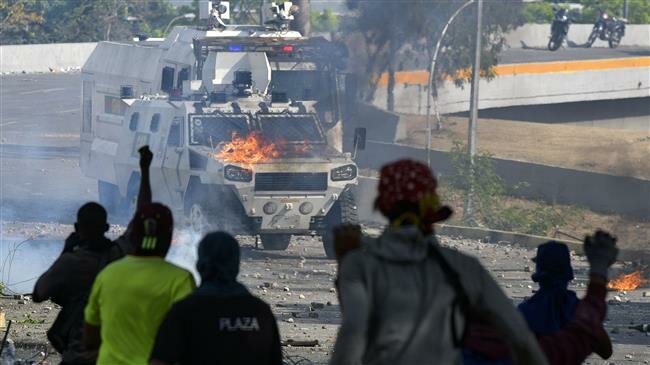 TEHRAN, Young Journalists Club (YJC) -"Washington's interference in Venezuelan affairs is a flagrant violation of international law," Lavrov said in a phone call with US Secretary of State Mike Pompeo on Wednesday.

Lavrov also criticized the threats made by the US officials, especially US President Donald Trump, about the use of force against Maduro, adding that "the pursuit of these aggressive steps is fraught with consequences."

"The intervention by Russia and Cuba is destabilizing for Venezuela and for the US-Russia bilateral relationship," US State Department spokeswoman Morgan Ortagus said in a statement quoting Pompeo.

Pompeo also "urged Russia to cease support for Nicolas Maduro and join other nations, including the overwhelming majority of countries in the Western Hemisphere, who seek a better future for the Venezuelan people," Ortagus added.

Early on Tuesday, a group of Venezuelan armed troops accompanying Guaido clashed with soldiers at an anti-government rally in the capital, Caracas. Gunfire was heard, and more than 100 people were reported wounded.

Late on Tuesday, Maduro announced in a televised speech that the group of military personnel supporting Guaido had been defeated.

He said that Guaido was seeking to spark an armed confrontation that might be used as a pretext for foreign military intervention, but “loyal and obedient” members of the country’s armed forces had put down the mutiny within hours.

A second day of confrontations came on Wednesday as opposition supporters and security forces clashed during May Day protests in Caracas.

National Guard troops fired tear gas at stone-throwing protesters attempting to block a highway close to the air base where Guaido had tried on Tuesday to spark the coup.

Thousands of Maduro’s supporters dressed in red also marched along the main highway toward the presidential palace on Wednesday, marking one the biggest pro-government rallies in the capital in months.

Addressing his supporters, Maduro said the coup attempt was directed from the White House.

Tensions in Venezuela have soared in the past several months after Guaido, president of the defunct National Assembly, abruptly declared himself “interim president” of Venezuela in January, challenging the outcome of last year’s presidential election, in which Maduro emerged victorious.

Washington has also confiscated Venezuela’s US-based oil assets in an attempt to channel revenue from them to Guaido.

Maduro has repeatedly accused Washington of openly pushing for a coup in the Latin American country.

Caracas has accused Washington of waging an economic war, which has led to hyperinflation and widespread shortages of food and medicine in Venezuela.