TEHRAN, May 02 -Israeli warplanes have carried out a wave of airstrikes against positions of the Hamas resistance movement in Gaza, promoting two retaliatory rocket launches from the blockaded enclave towards the Israeli-occupied territories. 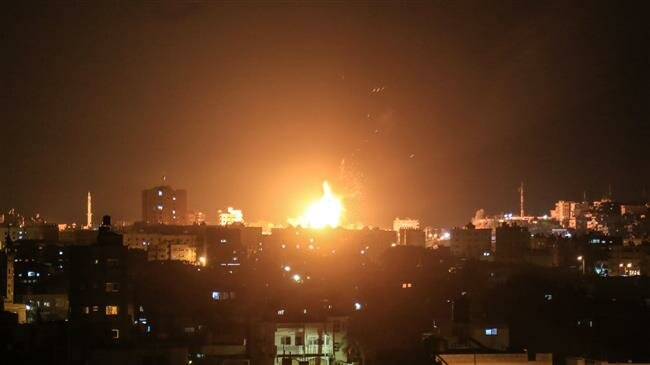 TEHRAN, Young Journalists Club (YJC) -The Israeli military said its fighter jets targeted several Hamas positions in the northern part of the strip in response to the alleged launch of incendiary balloons from the besieged enclave.

There were no immediate reports of Palestinian injuries.

In response to the air raids, two rockets were reportedly fired from Gaza towards the southern parts of the Israeli-occupied territories, triggering, according to the Israeli military, several rounds of red alert sirens in the communities of Alumim and Nahal Oz in the Sha’ar Hanegev region.

The projectiles fell in an open area, and no injuries were reported, Israeli media reported.

Flying fiery kites and balloons has become a new mode of protests by Gazans since last March, when the regime in Israel launched a bloody crackdown against anti-occupation demonstrations near the fence separating Gaza from the Israeli-occupied land.

Tel Aviv, however, holds Hamas responsible for such a show of protest.

Israeli officials have tried to put a criminal spin on the protests, claiming that kites and balloons launched by Palestinians have burned thousands of acres of farmland, forests and nature reserves in the regions around the Gaza Strip.

A ceasefire between Israel and Hamas brokered by Egypt and the United Nations had led to relative calm earlier this year.

But on Tuesday, Israel reduced the offshore fishing limit it imposes for vessels operating out of Gaza after a rocket was allegedly fired from the territory.

Since March 30 last year, the Palestinians in Gaza have been holding weekly rallies to demand the right to return for those driven out of their homeland by Israeli aggression and an end to the siege on the enclave. Israeli snipers and special troops have shot and killed more than 270 Palestinians and injured over 16,000 others.

A United Nations (UN) fact-finding mission found earlier that Israeli forces committed rights violations during their crackdown against the Palestinian protesters in Gaza that may amount to war crimes.

Gaza has been under Israeli siege since June 2007, which has caused a decline in living standards. Israel has launched three major wars against the enclave, killing thousands of Gazans each time and shattering the impoverished territory’s already poor infrastructure.