TEHRAN, May 02 -Researchers in Florida, helped by donations from SeaWorld and Busch Gardens, are behind a successful and growing effort to breed aquarium fish in captivity. 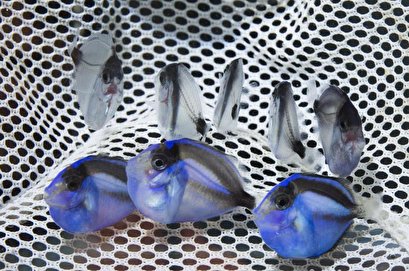 TEHRAN, Young Journalists Club (YJC) -Once almost impossible, captive breeding of colorful reef fish is quickly growing in scope and variety at a University of Florida research station near Tampa and in a few other research facilities around the world.

The key to success has been finding the right type of plankton -- microscopic crustaceans and other tiny marine life -- that the fish can eat when they are just tiny specks themselves with microscopic mouth openings.

Scientists like Matt DiMaggio have to pay close attention to water quality, temperature, light and other factors. This year, they even are experimenting with different kinds of green or brownish algae that might help the tiny fry see their food

"Understanding how to breed fish like this in captivity will be more vital as the world population grows," said DiMaggio, assistant professor of aquaculture at the University of Florida. "Half the seafood we eat now is grown. Even though we are not eating these fish, it's farming."

Each year, about 10 million tropical fish are imported into the United States, where enthusiasts have at least 1 million saltwater aquariums, according to the American Pet Products Association.

National Geographic noted in a 2018 article that captive breeding doesn't nearly satisfy demand, and most of the 2,000 species in trade are captured in about 40 countries, with most coming from the Philippines and Indonesia. Those numbers spur researchers like DiMaggio to greater effort.

Fish raised in captivity actually are better suited to living in an aquarium, he said. Commercial aquarium companies like Segrest Farms, also based near Tampa, are partners in the work.

"Once we get them past the difficult larval stage, they become more accustomed to eating pelletized food," DiMaggio said. "And they are more resistant to many diseases."

Sandy Moore, president of Segrest, said many people would prefer to have tank-raised fish, which allows breeding for specific colors or other characteristics.

"We think the work is really critical to the sustainability of the marine ornamental trade. The hobby demands a shorter supply chain," Moore said.