TEHRAN, May 04 - South Korea says it's "very concerned" about North Korea's weapons launches, calling them a violation of last year's inter-Korean agreements to reduce tensions between the countries. 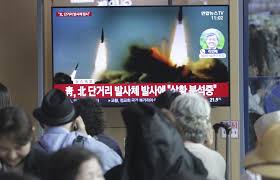 South Korea says it's working with the United States to find out details of the launches such as what type of projectiles North Korea fired earlier Saturday.

The South Korean statement came after a meeting of the presidential national security adviser, the defense minister, the intelligence chief and other officials following the North Korean launches at the presidential Blue House.