TEHRAN, May 05 -US President Donald Trump has expressed confidence in North Korean leader Kim Jong-un and forging a “deal” with Pyongyang as well as “great relationship” with Russia after a phone conversation with his Russian counterpart and despite the North’s latest test firing of missiles. 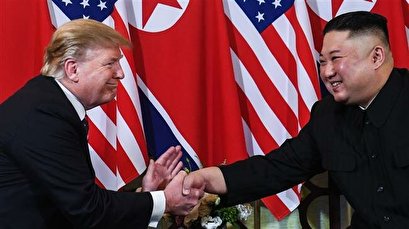 TEHRAN, Young Journalists Club (YJC) -“I believe that Kim Jong Un fully realizes the great economic potential of North Korea, & will do nothing to interfere or end it. He also knows that I am with him & does not want to break his promise to me. Deal will happen!” Trump stated in a Twitter message on Saturday, but did not elaborate on the nature of Kim’s promise or the sort of deal he deems imminent.

Trump has often touted a rosy relationship with Kim on Twitter, voicing optimism that the two can negotiate denuclearization on the Korean Peninsula. Their two summits — in Singapore in 2018 and in Vietnam earlier this year — however have yet to produce any tangible deal beyond a pledge that Washington and Pyongyang would work toward denuclearization.

Kim has since met with Russia’s President Vladimir Putin in Vladivostok last month. Japanese Prime Minister Shinzo Abe is also reportedly considering a meeting with Kim, according to a Friday report in the Japan’s Shankei newspaper.

North Korea conducted a "strike drill" for multiple launchers and tactical guided weapons into the East Sea in a military drill supervised by leader Kim Jong-un on Saturday, the North's state media reported on Sunday.

The purpose of the drill was to test performance of "large-caliber long-range multiple rocket launchers and tactical guided weapons by defense units," the Korean Central News Agency said, implying that the latest firing was not the long-range ballistic missiles that have been seen as a threat to the United States.

The statement came a day after the latest firing, which analysts interpreted as an attempt to exert pressure on Washington to give ground in negotiations to end the North's nuclear program after the February summit ended in failure.

"Yes, the tests were the most serious since the end of 2017, but this is largely a warning to Trump that he could lose the talks unless Washington takes partial denuclearization steps offered by Kim," said Shin Beom-chul, a senior fellow at the Asan Institute for Policy Studies. "A resumption of long-range test could be next unless Kim gets what he wants soon."

The Saturday tweet by the US president came after he held a phone conversation with Putin on Friday, in which the two discussed a range of geopolitical issues, including nuclear arms control as well as the Korean peace process.

“Very good call yesterday with President Putin of Russia. Tremendous potential for a good/great relationship with Russia, despite what you read and see in the Fake News Media. Look how they have misled you on “Russia Collusion.” The World can be a better and safer place. Nice!” Trump’s tweet read.

Trump raised eyebrows on Friday after the White House announced his phone communication with Putin, though he insisted that he did not press his Russian counterpart on Moscow’s efforts to interfere in US elections.

The two leaders reportedly discussed Mueller’s probe into alleged interference, but Trump told reporters that Putin said the investigation “started off being a mountain and ended up being a mouse.”

Trump further continued his attack on mainstream media coverage of special counsel Robert Mueller's Russia probe, accusing the press of having "misled" the American people on the special counsel's findings.

Trump and his Republican Party allies have claimed Mueller's findings as a victory after the special counsel did not find conclusive evidence of conspiracy between the Trump campaign and the Kremlin in Russia’s interference in the 2016 election.