TEHRAN, May 05 - The European signatories to the 2015 Iran deal have censured recent decisions by the United to stop sanctions waivers for Iran oil imports and to impose restrictions on the country’s exports of enriched uranium. 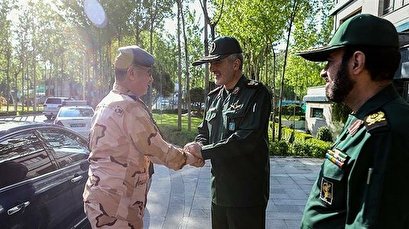 TEHRAN, Young Journalists Club (YJC) - "We ... take note with regret and concern of the decision by the United States not to extend waivers with regards to trade in oil with Iran," Britain's foreign office said in a joint statement with its German and French counterparts and the European Union (EU) on Saturday.

"We also note with concern the decision by the United States not to fully renew waivers for nuclear non-proliferation projects," Britain's foreign office added.

The US State Department announced in statement issued on Friday that “Iran must stop all proliferation-sensitive activities, including uranium enrichment, and we will not accept actions that support the continuation of such enrichment.”

Under Iran's 2015 nuclear deal, known as the Joint Comprehensive Plan of Action (JCPOA), Tehran is limited to keeping 300 kilograms of uranium enriched up to 3.67 percent. As part of the JCPOA, Iran is allowed to sell any enriched uranium above that threshold on international markets in exchange for natural uranium, with Russia a key player.

On May 8, 2018, US President Donald Trump announced that he would abandon the JCPOA, reached between Iran and six world powers – the US, the UK, France, Russia, China and Germany.

Under the JCPOA, Iran agreed to limit parts of its peaceful nuclear program in exchange for the removal of all nuclear-related sanctions.

Washington’s new decision to restrict Iran’s enriched uranium exports came after the Trump administration said in a statement on April 22 that, in a bid to reduce Iran's oil exports to zero, buyers of Iranian oil must stop purchases by May 1 or face sanctions.