40 dead after fire breaks out on board Russian passenger jet

TEHRAN, May 06 - At least 40 people, including two teenagers, have died after a large fire broke out on a Russian passenger plane, after it made an emergency landing at Moscow’s Sheremetyevo Airport on Sunday. 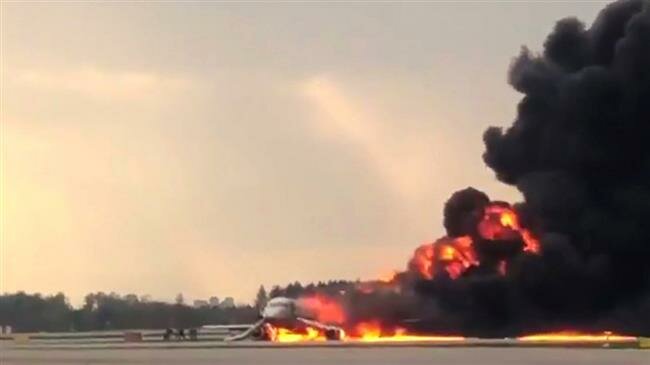 TEHRAN, Young Journalists Club (YJC) - An airport spokesperson said the jet turned back for unspecified technical reasons and made a hard landing which started the fire.

Dramatic footage on social media showed the plane landing in Moscow, as smoke and fire surrounded part of the plane, The Independent reported.

Passengers managed to escape from the burning plane after it landed.

TASS news agency said the blaze may also have been caused by a lightning strike, according to a source who had talked to the crew.

An Aeroflot spokesperson said that passengers left the craft on an emergency inflatable slide. Video footage shows some carrying their suitcases.

Aeroflot is Russia’s national carrier. A rescue team is thought to have searched the plane’s tail, which was completely burned, for survivors.

News agencies reported conflicting figures on the number of injured – from five to more than 10.

There were 78 people in total on board, according to news agency RIA, including five crew members.

The plane had taken off from Moscow for a regional flight to the northern city of Murmansk.

It returned to the Russian capital shortly afterwards. It is unclear what caused the jet to return to Moscow’s Sheremetyevo Airport.

Russian officials said they had opened an investigation into the blaze and were looking into whether the pilots had breached air safety rules.