TEHRAN, May 07 -At least five people were killed and more than 230 arrested in protests sparked by a failed coup attempt against Venezuelan President Nicolas Maduro last week, the government has announced. 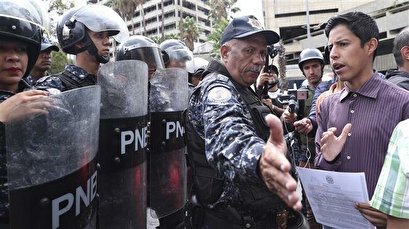 TEHRAN, Young Journalists Club (YJC) -Venezuelan Attorney General Tarek William Saab said on Monday that 233 people were arrested and that all of them were being investigated.

Saab confirmed that 18 arrest warrants were also issued against “civilians and military plotters,” but he gave no names.

Last Tuesday, a small group of Venezuelan armed troops accompanying opposition figure Juan Guaido clashed with soldiers at an anti-government rally in the capital, Caracas, in an attempted coup. Gunfire was heard, and more than 100 people were reported wounded.

The putsch quickly petered out, though, and some 25 renegade soldiers sought refuge at the Brazilian Embassy in Caracas.

Maduro vowed to bring justice to “traitors” and thanked the country’s armed forces for their continued loyalty to his government.

Guaido, whose latest call for a coup had failed, blamed the armed forces for not rushing to his side.

“We still need more soldiers, and maybe we need more officials of the regime to be willing to support it,” he told The Washington Post on Saturday. Later on Monday, he pointed finger at Venezuelans in general, saying there were “people who failed to follow through.”

The opposition figure, who has declared himself “interim president” of Venezuela, said in an interview with the BBC that he was considering asking Washington to intervene in the country.

The administration of US President Donald Trump, which has recognized Guaido’s self-proclamation, has repeatedly threatened Maduro’s elected government with military action.

As part of a pressure campaign to push Maduro out of power, the US has long resorted to harsh sanctions against his government. According to Reuters, US Vice President Mike Pence will announce more measures against the country on Tuesday.

One US administration official told Reuters that 25 more magistrates on Venezuela’s Supreme Court would be targeted with sanctions as a warning not to approve a potential arrest warrant against Guiado.

The Venezuelan government has not yet moved to arrest Guaido. But on Thursday, the Supreme Court ordered the re-arrest of another opposition figure, Leopoldo Lopez, who made an appearance alongside Guaido during last week’s coup attempt after allegedly escaping house arrest.

The 48-year-old Lopez has reportedly taken refuge at the Spanish Embassy in Caracas with his family.

He was sentenced to 14 years in prison in 2014 after being convicted of inciting violent protests against the government. At least 43 people were killed during those protests. He was transferred to house arrest in 2017.

According to the US administration official, the US vice president will offer new “carrots” to the Venezuelan military personnel to entice them to defect and join the opposition. The official did not provide details.