TEHRAN, May 07 -Two Reuters journalists who had been jailed in Myanmar for reporting the massacre of Rohingya Muslims by the country’s military and Buddhist mobs have been released after spending 511 days in prison in a case that sparked an international outcry. 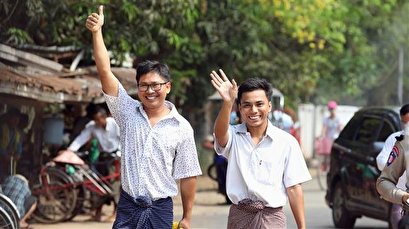 TEHRAN, Young Journalists Club (YJC) -Wa Lone, 33, and Kyaw Soe Oo, 29, were released from Insein Prison on the outskirts of Yangon on Tuesday under a presidential amnesty for 6,520 prisoners.

Thousands of amnesties have been granted by President Win Myint to inmates since last month on the occasion of the traditional Myanmarese New Year, which began on April 17.

Wa Lone and Kyaw Soe Oo were arrested in December 2017. They were sentenced to seven years behind bars in September last year over allegedly breaching a law on state secrets by obtaining confidential documents.

The two pleaded not guilty, telling the court that police officers had handed them papers at a restaurant moments before other officers appeared to arrest them. One of the two police officers testified that the restaurant meeting had in fact been a set-up to entrap the journalists. They were convicted nevertheless.

After their release on Tuesday, the two were received by reporters and well-wishers.

“I’m really happy and excited to see my family and my colleagues. I can’t wait to go to my newsroom,” Wa Lone said, expressing gratitude for the international efforts to secure his and Kyaw Soe Oo’s freedom.

At the time of their arrest, the reporters were working on an investigation into the killing of 10 Rohingya Muslims in the western state of Rakhine during an army crackdown that began in August 2017. The investigation was completed by their colleagues and was published by Reuters in 2018, uncovering the involvement of security forces in killings, arson, and looting.

Myanmar’s Supreme Court rejected the reporters’ final appeal in April, despite the testimony by the one police official about the set-up. The Yangon High Court had dismissed an earlier appeal in January.

The reporters’ wives asked for a pardon in a letter sent to the government last month.

Lord Ara Darzi, a British surgeon and healthcare expert who has served as a member of an advisory group to Myanmar’s government on reforms in Rakhine State, hailed the release, saying “This outcome shows that dialogue works, even in the most difficult of circumstances.”

Darzi said in a statement that discussions about the pardon for the two journalists had involved the Myanmar government, Reuters, the United Nations (UN), and representatives of other governments, without elaborating.

A spokesman for UN Secretary-General Antonio Guterres said the UN chief was relieved to learn of the release.

The UN has described the broader state-sponsored crackdown in Rakhine as “genocide.”