TEHRAN, May 08 - Finland's center-left Social Democratic Party which narrowly won last month's general election says it is having talks with four centrist and left-leaning parties to form a coalition government but not the populists. 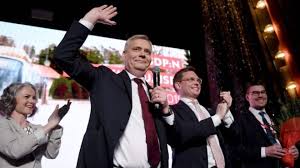 TEHRAN, Young Journalists Club (YJC) - Antti Rinne, the leader of what became Finland's largest party by an extremely narrow margin, said Wednesday that a combination including the Center Party, the Greens, the Left Alliance and the Swedish People's Party of Finland "is the most stable composition for building a majority government.

Together, the five parties combined have 117 of the 200 seats in Finland's parliament. Majority is 101 lawmakers in the Eduskunta assembly.

In the April 14 vote, the euroskeptic, anti-immigration Finns Party secured 17.5% support — 0.2 % less than the Social Democrats.