TEHRAN, May 09 -"The morphological details that can now be visualized can also be used for applications ranging from taxonomy and functional considerations to educational projects in museums," said researcher Markus Lambertz. 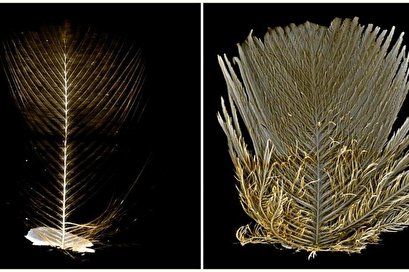 When imaging organisms and biological materials, fossilized features or delicate skeletons, CT scans often fail to render the fine surface details. Researchers in Germany managed to solve the problem by coating materials in a thin layer of gold.

"Up to now, many delicate surface structures of our research objects could simply not be represented by means of computer tomographic analyses," Peter Ruehr, a doctoral student at the University of Cologne's Zoological Institute, said in a news release.

In order to image fine details, like an organism's bristles or scales, the researchers had to find a way to increase the X-ray contrast. Tests showed gold did the trick.

When scientists compared images of untreated samples with images of samples coated in gold, previously invisible surface features revealed themselves. The gold layer did not interfere with the ability of computer tomography to capture internal anatomical details.

In the lab, scientists showed the use of gold enhanced the CT scans of insects, bird feathers, parts of plants and spider silk.

"We wanted to show that our new approach works not only for certain groups of organisms, but generally expands the methods of modern morphology," Ruehr said.

"The morphological details that can now be visualized can also be used for applications ranging from taxonomy and functional considerations to educational projects in museums," said researcher Markus Lambertz.

The technology, described this week in the Journal of Anatomy, could also be used for quality control testing in commercial manufacturing.

"By combining two already well-established methods for the first time, we have created something completely new," Ruehr said. "This opens up a series of previously closed doors in the three-dimensional evaluation of even the finest structures."