TEHRAN, May 12 - ‘Yellow Vest’ protesters faced off with riot police as they demonstrated in the streets of France on Saturday, for the 26th consecutive week. 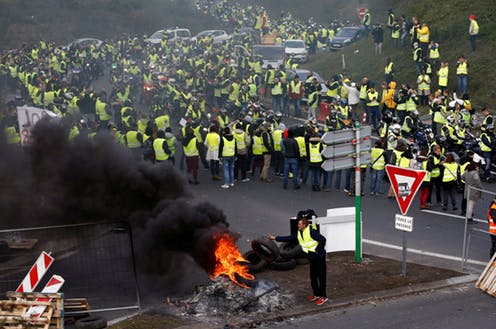 TEHRAN, Young Journalists Club (YJC) - The movement began as a protest against a fuel tax, but soon transformed into an anti-establishment group.

Reports indicate that the protests took place in many cities across France, including the capital Paris, RT reported.

Officers fired tear gas canisters at protesters, some of which were thrown back at them.

But this is not the first time these protests have turned violent, with damage and injuries reported in previous weeks.

However, government reports indicate the numbers of protesters is down significantly.

The 'Yellow Vest' rallies have been ongoing in the country since mid-November.

In March, angry protesters ravaged much of the Champs-Élysées during the previous Ultimatum.

The movement represents one of the worst crisis to hit French President Emmanuel Macron's term of office since he came to power in 2017.