TEHRAN, May 12 - Voters in north India lined up early on Sunday to cast their ballots in the second-to-last round of a seven-phase general election, with Prime Minister Narendra Modi facing a diverse group of opposition parties seeking to deny him a second term. 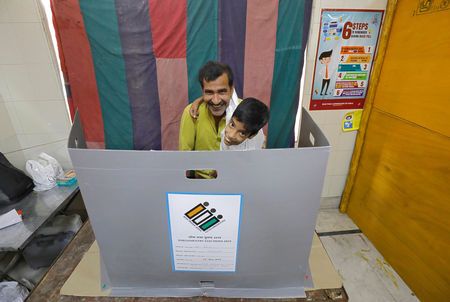 TEHRAN, Young Journalists Club (YJC) - More than 100 million people across seven states were voting on Sunday. The 39-day-long poll kicked off on April 11 with Modi as front-runner after an escalation of tension with neighboring Pakistan.

But opposition parties have taken heart at what they see as signs Modi's Hindu nationalist Bharatiya Janata Party (BJP) may be losing ground and have begun negotiations over a post-election alliance even before polling ends on May 19. Votes will be counted on May 23.

The president of the main opposition Congress party, Rahul Gandhi, said the main issues in the election were unemployment, economic hardship in the countryside, the de-monetization of bank notes and a new sales tax.

"It was a good fight," Gandhi said after he cast his vote.

"Narendra Modi used hatred, we used love. And I think love is going to win."

A lack of new jobs - despite annual economic growth of about 7% - and the plight of farmers struggling with falling crop prices have been major worries for voters.

A new goods and services tax (GST), as well as Modi's shock ban on all high-value currency notes in 2016, hurt small and medium businesses.

Some voters in the capital, New Delhi, said they were backing Modi because they were won over by his tough stance on security.