TEHRAN, May 14 - Yemeni media forces report on Tuesday a simultaneous drone-attack of army and popular forces on Saudi Arabia's vital facilities in response to the regime's continuous aggression. 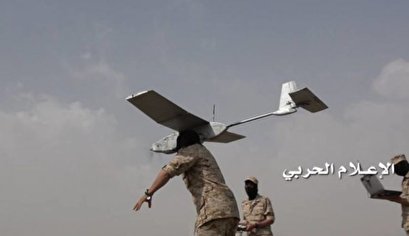 TEHRAN, Young Journalists Club (YJC) - A Yemeni military source said that the large scale drone operation was carried out against the Saudi regime's sheer aggression and their blockade of Yemeni people.

The source stressed that in case the regime's blockade of Yemen's people continues, the Yemeni Army and popular forces will hit the regime more painfully.

Saudi Arabia and a number of its regional allies launched a devastating campaign against Yemen in March 2015, with the goal of bringing the government of the fugitive former president Abd Rabbuh Mansur Hadi back to power and crushing the Houthi Ansarullah movement.

According to a December 2018 report by the Armed Conflict Location and Event Data Project (ACLED), a nonprofit conflict-research organization, the Saudi-led war has claimed the lives of over 60,000 Yemenis since January 2016.

The war has also taken a heavy toll on the country’s infrastructure, destroying hospitals, schools, and factories. The UN said in a report in December 2018 that over 24 million Yemenis are in dire need of humanitarian aid, including 10 million suffering from extreme levels of hunger.