TEHRAN, May 14 - Homes and roads have been flooded in parts of Bosnia after rivers broke their banks following heavy rains, triggering concerns Tuesday of a repeat of floods five years ago when dozens died. 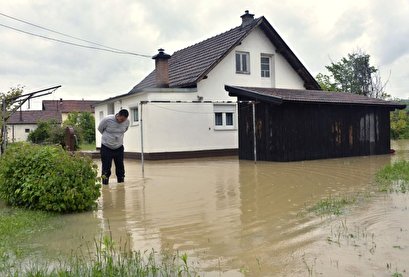 TEHRAN, Young Journalists Club (YJC) - Bosnian media reported that rescuers are searching for a 6-year-old boy who fell into a swollen stream near his home in the central Bosnian village of Begov Han. The N1 TV station says the boy went missing around noon (1000 GMT) on Tuesday.

Several local authorities in northern and central Bosnia introduced emergency measures on Tuesday to battle the floods and urged residents living close to rivers to evacuate their homes. Some schools have canceled classes, while electricity and water supplies have been disrupted.

The rainfall has also caused landslides, closing down local roads. And the Vrbanja river has destroyed a temporary pedestrian bridge near the town of Banja Luka.

In Serb-run Bosnia, Republika Srpska, a government coordination team is due to meet later Tuesday to assess the situation, while Bosnia's army said it was ready to help if needed.

Officials across the country sought to dispel concerns the region was facing a repeat of the floods five years ago.

"We don't expect the 2014 situation because the intensity of the rainfall was much higher then," said Dusan Vranjes, an emergency sector official in the northwestern town of Prijedor.