TEHRAN, May 14 - The Saudi energy minister says the kingdom has stopped pumping crude oil on a major pipeline across the country after retaliatory drone strikes carried out by Yemeni army forces and their allies. 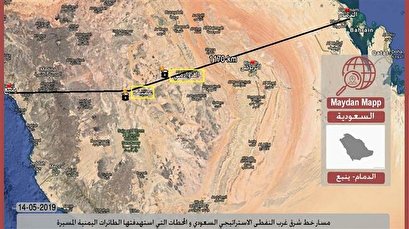 TEHRAN, Young Journalists Club (YJC) - Khalid A. Al-Falih said the national petroleum and natural gas company, Saudi Aramco, on Tuesday halted oil pumping on the pipeline from the oil-rich Eastern Province to the Red Sea, while the damage was being evaluated and its two targeted pumping stations were being repaired.

“Saudi Aramco took precautionary measures and temporarily stopped operation of the pipeline, as it is evaluating the situation and working on restoring the operations of the affected pump station and the pipeline,” he said in a statement published by state news agency SPA.

He described the attack “an act of terrorism,” asserting that Saudi oil output and exports for crude and refined products were continuing without disruption.

The 1,200-kilometer (750-mile) pipeline, which reportedly has a capacity of at least five million barrels per day, carries crude oil from Saudi Arabia’s main eastern fields to the Red Sea port city of Yanbu in the west.

The targeted pumping stations are located in the towns of Dawadmi and Afif, which lie in the Najd region west of the capital, Riyadh.

Earlier in the day, an unnamed Yemeni military source told Arabic-language al-Masirah television network that Yemeni soldiers, backed by allied fighters from Popular Committees, launched a major operation against the strategic economic target in Saudi Arabia in retaliation for the Riyadh regime’s devastating military aggression and siege of the impoverished country.

The source added that seven unmanned aerial vehicles were involved in the attacks.

US West Texas Intermediate (WTI) crude futures were at $61.35 per barrel, up 31 cents or 0.51%.
Furthermore, Saudi Arabia’s main stock index, the Tadawul, was down 1.5% at midday London time.

The development came only two days after Saudi Arabia said two of its oil tankers were among those attacked in an unspecified “sabotage operation” off the coast of Fujairah in the United Arab Emirates.

Fujairah port is the only terminal in the UAE located on the Arabian Sea coast. The small emirate has an oil terminal and a pipeline that delivers crude oil from Abu Dhabi which sits on the majority of UAE oil reserves.

Separately, a member of the Political Council of the Houthi Ansarullah movement described Yemeni drone strikes against strategic targets inside Saudi Arabia and the UAE as in line with the right of self defense, stating that Yemeni forces will cease such aerial assaults once the Riyadh and Abu Dhabi regime change course and put an end to their military aggression.

“Following Saudi Arabia and the UAE’s flagrant disregard for our demand to stop the onslaught and persistence on the blockade of Yemen, Yemeni forces launch attacks against targets in the heart of these countries high on their agenda," said Mohammad al-Bukhaiti.

“They are within the range of our attacks, and US battle ships cannot rescue them. The Yemeni army, which previously did not even have Kalashnikov rifles in inventory, can now produce drones that infiltrate into Saudi Arabia and the UAE. We are fully prepared to defend our soil. These attacks attest to our military progress despite the ongoing sea, land and air blockade on Yemen,” he said.

Meanwhile, spokesman for the Ansarullah movement, Mohammed Abdul-Salam, also commented on the issue, saying, “The attacks on Saudi oil installations were in response to the massacre of Yemeni people. The Yemeni nation has no option but to defend itself in the face of the Saudi-led coalition’s impudence and its systematic terrorist acts, which are being supported by the United States and other Western states.”

Colonel Aziz Rashid, a Yemeni military expert, also said the air raids were in response to Saudi attacks during the holy Muslim fasting month of Ramadan, and proved the failure of US-built Patriot missile system to protect Saudi Arabia against Yemeni assaults.

Rashid added the drone strikes will seriously down Saudi and UAE stocks and will eventually result in capital flight from the two Persian Gulf countries.

“This operation will fairly undermine the morale of Saudi and Emirati troops, who are heavily depending on arsenals filled with munitions bought from the United States, Britain, France and other Western countries,” he pointed out.

Saudi Arabia and a number of its regional allies launched a devastating campaign against Yemen in March 2015, with the goal of bringing the government of former president, Abd Rabbuh Mansur Hadi, back to power and crushing the Houthi Ansarullah movement.

According to a December 2018 report by the Armed Conflict Location and Event Data Project (ACLED), a nonprofit conflict-research organization, the Saudi-led war has claimed the lives of over 60,000 Yemenis since January 2016.

The war has also taken a heavy toll on the country’s infrastructure, destroying hospitals, schools, and factories. The UN said in a report in December 2018 that over 24 million Yemenis are in dire need of humanitarian aid, including 10 million suffering from extreme levels of hunger.