TEHRAN, May 14 - The United Nations (UN) says Yemen’s Houthis have handed over security of three key ports in the western province of Hudaydah to the local “coastguard” by unilaterally pulling out from the ports in line with a UN-brokered accord, while hinting that the other side to the conflict has not carried out its end of the bargain. 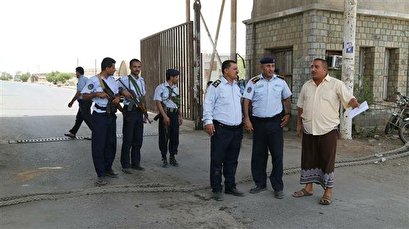 TEHRAN, Young Journalists Club (YJC) - The Houthi movement has been in control of the key ports of Salif, Ras Isa, and Hudaydah, the last of which has been under a tight siege and offensive by forces fighting on behalf of a former Yemeni regime as well as Saudi Arabia and the United Arab Emirates, the two main countries in a coalition waging war on Yemen.

More than 70 percent of Yemen’s imports used to pass through the docks of Hudaydah, a lifeline for the war-ravaged country’s crippled economy. Salif was used for unloading all main types of grain, and Ras Isa, a vital oil terminal, was used for exporting Ma’rib’s light crude oil.

The lengthy siege has pushed tens of thousands of people in Yemen to the verge of starvation and crippled the country’s economy. In an effort to prevent the humanitarian situation from further deteriorating and to avert a larger assault by the Saudi-led coalition on the ports, the Houthis signed a UN-brokered agreement with the ex-government in Sweden last December.

The warring sides agreed to withdraw their forces from the ports in a two-stage process, the first phase of which for the Houthi side unilaterally began on Saturday and was scheduled to be completed on Tuesday.

Lt. Gen. Michael Lollesgaard, the head of the UN Redeployment Coordination Committee (RCC), in a statement on Tuesday confirmed the handover “of the security of the ports to the coastguard” by Houthis, an important step in the first phase of the so-called redeployment.

“UN teams have been monitoring this redeployment, which has been executed, partly as agreed by the Yemeni parties in the concept of phase one,” he said after visiting the ports.

In the first stage, Houthis had to draw back five kilometers from the three ports until Tuesday, while the forces of the former government, currently concentrated four kilometers from Hudaydah, were to withdraw one kilometer from the flash-point ports.

The latter forces, however, has so far firmly refused to retreat, and the Houthis have denounced them for the refusal. On Saturday, Houthi spokesman Mohammed Abdulsalam strongly called on the UN and the UN Security Council to press the former regime and the Saudi-led coalition to act in accordance with the Stockholm agreement.

Lollesgaard said, “There is still a lot of work to be done on the removal of the (military) manifestations, but cooperation has been very good,” without giving further details.

The UN Security Council is due to hear a briefing on Hudaydah on Wednesday.

In the second phase of the redeployment, both sides would pull troops 18 kilometers outside Hudaydah and heavy weapons 30 kilometers away.

According to the Stockholm agreement, the UN will help in the management of the three key ports, which will be operating under the control of Yemen’s Red Sea Port Corporation and local coast guards. The world body also will assist in inspection of ships.

Leading a coalition of its allies, Saudi Arabia invaded Yemen in March 2015 in an attempt to reinstall the former regime of Abd Rabbuh Mansur Hadi, who had resigned amid popular discontent and fled to Riyadh.

The war initially consisted of an aerial campaign but was later coupled with a naval blockade and the deployment of ground forces and mercenaries to Yemen. Armed militia loyal to Hadi are also involved in the war.

The aggression is estimated to have left 56,000 Yemenis dead.

The Saudi-led war has also taken a heavy toll on the country’s infrastructure, destroying hospitals, schools, and factories. The UN has said that a record 22.2 million Yemenis are in dire need of food, including 8.4 million threatened by severe hunger. According to the world body, Yemen is suffering from the most severe famine in more than 100 years.

A number of Western countries, the US, France, and Britain in particular, are also accused of being complicit in the ongoing aggression as they supply the Riyadh regime with advanced weapons and military equipment as well as logistical and intelligence assistance.