TEHRAN, May 15 - The European Commission is working on its largest regulatory push on banking since the financial crash that could curb Britain’s access to the bloc, according to an internal draft document seen by Reuters. 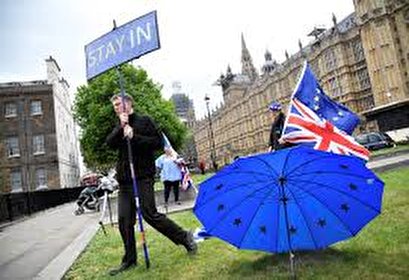 TEHRAN, Young Journalists Club (YJC) -In the 12-page strategy document, EU officials outline provisional financial services plans for the bloc’s executive body, which sets the legislative agenda, and is due to see a change of top officials this year for a new five-year term.

The document makes clear that there will be an acceleration of financial regulation, after many years when little has happened following the wave of rules after the financial crash.

It suggests a review of the capital framework that would extend the extra capital buffer imposed on the world’s biggest banks, including Deutsche Bank, to other important institutions like settlement houses.

The document outlines the possibility of “concentration charges” on banks’ holdings of risky government debt, a step global regulators have so far shied away from.

That would be a break with the current situation, where banks do not have to set aside capital to cover holdings of their own government’s debt.

With Europe in the middle of a laundering scandal centered on lenders including Danske Bank, the document also suggests a centralized anti-money laundering supervisor and making the bloc’s rules to prevent such crime more binding.

It also flags possible rules to guard against cyber crime.

Critically, the list of planned legislative changes will examine how to make the bloc less dependent on Britain and the capital of London, the region’s preeminent financial center.

“Following the departure of the UK, there will be significant work to manage the relationship between the EU27 and the UK in the field of financial services, which will be a source of risk,” said the document.

“What’s the right balance between EU and non-EU financial services, in particular in the context of Brexit, in key sectors?”

The authors write that this question would be addressed amid continued efforts to build a pan-European ‘capital markets union’ (CMU) aimed at making the bloc more self-sufficient in core financial services.

“Building the CMU will be even more important as the UK withdraws from the Union,” said the document, which speaks about “autonomy” of EU financial infrastructure.

The many platforms for listing small companies could be consolidated “along the lines of the Nasdaq model”.

In the menu of possible action for the next European Commission, the report also suggests a European Financial Sector Cyber Security Act and new laws governing crypto currencies.