TEHRAN, May 19 - Nationalist and far-right parties from across Europe have rallied in Milan to support a populist alliance in the European parliament following this week’s vote. 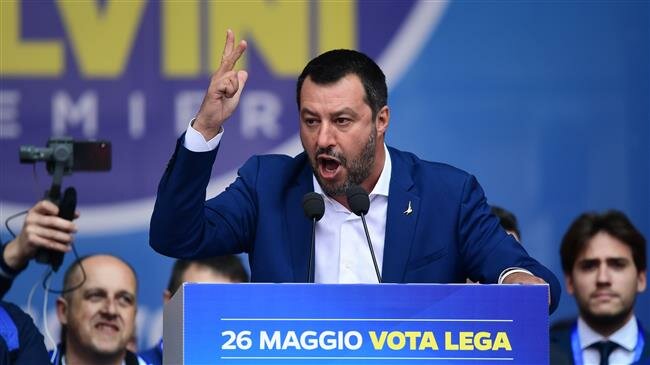 TEHRAN, Young Journalists Club (YJC) - The rally was organized by Italian Deputy Prime Minister Matteo Salvini and accompanied by a group of 12 European far-right allies in front of Milan’s Gothic cathedral on Saturday.

Alternative for Germany (AfD)'s leader Jorg Meuthen and France's Marine Le Pen were among those attending the demonstration held in support of Salvini's new alliance of Europe's nationalist parties ahead of the EU elections on May 23 and 26.

Austria's Freedom Party (FPO) canceled its participation at the rally as Vice Chancellor Heinz-Christian Strache – one of Salvini’s strongest allies – stepped down over a corruption scandal, in which he offered government contracts in return for political support.

During his speech in Milan's Duomo Square, the Italian deputy prime minister vowed to change history after this week’s EU elections by making the far-right alliance a major player in Europe’s political sphere.
“There are no extremists, racists or fascists in this square,” he claimed. “The extremists are those who have governed Europe for 20 years in the names of poverty and precarity.”

Salvini also claimed he had a network of alliances "that we never had before in the past" and listed parties in France, Austria, Sweden, Finland, Hungary, Czech Republic, the UK and Poland among his allies.

Salvini, who leads the anti-immigrant League Party, and Le Pen, leader of National Rally, alongside their allies are pushing for Europe of Nations and Freedom (ENF) group to become the European parliament’s third biggest party in the forthcoming elections.

Le Pen said she believes the ENF parliamentary group "will perform a historic feat" in the May vote and break the dominance of traditional center-right and center-left political groups in the European Parliament.

"Five years ago we were isolated, but today, with our allies, we will finally be in a position to change this Europe," she said.

The French politician said she had plans to form a "super faction" with other European far-rightists that could alter the structure of the European Union for the "first time in decades."

Le Pen also predicted that far-right populist parties will "pass from 8th place to third or second" in next week's European Parliament elections.

Other speakers, including Geert Wilders from the Netherlands’ Party of Freedom and Anders Vistisen from the Danish People’s party reiterated the common rhetoric of a crackdown on refugees and asylum seekers entering the continent.

"The political elites in Brussels cannot be trusted. They want to impose their orders on us. They want to take away our identity and our security," Wilders claimed at the rally.

Calling for "no more immigration," he praised Salvini as an "example for all of us," and said, "Europe needs more Salvinis."

Salvini, known for his tough anti-immigration stance, was elected into government last summer on a wave of popular anger in Italy towards Brussels and the Italian political establishment. He has refused to allow ships carrying refugees and asylum seekers rescued in the Mediterranean to dock at Italian ports.
Italy had been one of the main destinations for refugees fleeing war and poverty in Africa and the Middle East before the new populist government took office in Rome.

In Germany, Chancellor Angela Merkel said Europe needs to stand up decisively against the rise of right-wing populism.

She said Germany and other countries would work together to counter populist movements. She said Europe is a project of peace, freedom and prosperity, noting that nationalism is the enemy of that project.

In an interview with CNN on Friday, Italy's hardline deputy premier claimed European Union rules were creating "full-on unemployment" and that he sought to go back to pre-Maastricht Treaty rules.

"I would return to the pre-Maastricht with more normal fiscal economic rules where we spoke of well-being and full employment...The rules imposed by Brussels are creating full-on unemployment," Salvini said.

The Maastricht Treaty, officially known as The Treaty on European Union, was signed by the 12 member countries of the European Community in the Netherlands in 1992 to further European integration. It created the structure for a single currency, later named the euro, that was born in 1999.

Unemployment rates across the EU are at an all-time low, according to its statistical analysis body Eurostat, though rates in Italy are higher than in most other major European countries.