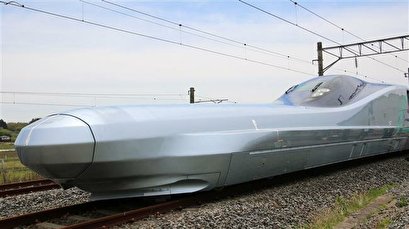 TEHRAN, Young Journalists Club (YJC) -A prototype of Japan’s next-generation Shinkansen bullet train, set to be the fastest train on wheels when it enters service, reached speeds of 320 kilometers (198 miles) per hour on a test run last week.

The train, code-named ALFA-X, will eventually hit 360 kilometers per hour when it begins to take passengers in about a decade, according to East Japan Railway.

The ALFA-X trains will go into service in 2030, allowing passengers to travel the 680-mile distance between Tokyo and Sapporo in less than four hours. It will outpace China’s Fuxing train, which runs at 10 kilometers per hour slower despite having the same top speed capabilities as the ALFA-X.

Production of the 10-car train with a long nose-shaped head finished in early May at a cost of 10 billion yen ($91 million).

The East Japan Railway said it “will continue testing the train for about three years.”

“We will try to shorten traveling time with the next-generation Shinkansen,” said Kazunori Koyama, an official in charge of the testing.

Japan is a pioneer in high-speed rail networks, hailed for their punctuality and safety measures, including the emergency stop system, which can automatically slow down speeds before a major earthquake strikes.