TEHRAN, May 21-Iran says has increased by fourfold the production rate of uranium enriched to 3.67% just a few weeks after the country officially stopped implementing some of its commitments under an international nuclear accord. 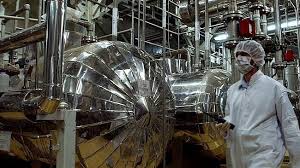 TEHRAN, Young Journalists Club (YJC) -The spokesman for the Atomic Energy Organization of Iran (AEOI), Behrouz Kamalvandi, made the remarks while addressing reporters at Natanz nuclear facility on Monday.

"This issue does not mean an increase in enrichment level or an increase in centrifuge machines or a change in the type of centrifuges, but the production capacity of these 3.67% enriched uranium will be quadrupled," Kamalvandi said.

He added that Iran has informed the International Atomic Energy Organization (IAEA) of this issue.

Kamalvandi said the production capacity for 3.67% enriched uranium can be increased using the existing number of centrifuges. So, he added, Iran would exceed the cap of 300 kilograms of low-enriched uranium in the near future.

He noted that the increase in production is a message to other signatories to the nuclear deal, officially known as the Joint Comprehensive Plan of Action (JCPOA), to tell them they must take necessary measures asked by Iran when it announced downgrading of its commitments.

According to the JCPOA, 300 kilograms has been specified as the ceiling for production of 3.67% enriched uranium by Iran, which must be observed by the country for a period of 15 years.

"We will reach the cap of 300 kilograms within a few weeks. Our technical requirements and decisions by senior [Iranian] officials will determine our next measures," the AEOI spokesman said.

US President Donald Trump withdrew Washington in May 2018 from the JCPOA, reached between Iran and the P5+1 group of countries -- the US, Britain, France, Russia and China plus Germany -- in July 2015. He also decided to re-impose unilateral sanctions against Tehran.

Under the JCPOA, Iran undertook to put limits on its nuclear program in exchange for the removal of nuclear-related sanctions.

Under the JCPOA, Iran is allowed to keep 300 kilograms of uranium enriched up to 3.67 percent. The deal requires Tehran to sell off any enriched uranium above the limit on international markets in return for natural uranium.

On the first anniversary of the US withdrawal from the nuclear deal, Iran announced that it would suspend the implementation of some of its commitments under the deal, announcing that it would stop exporting excess uranium and heavy water, setting a 60-day deadline for the five remaining parties to the deal to take practical measures towards ensuring its interests in the face of the American sanctions.

Back in December, Iran’s nuclear chief said the Islamic Republic is not "bluffing" when it says it is ready to resume twenty-percent uranium enrichment in the Fordow nuclear facility in case other parties to the Iran nuclear deal fail to save the 2015 accord.

“The enrichment is currently underway, but we would put aside the 300kg limit [set by the nuclear agreement] whenever we wish, and would do the enrichment at any volume and level,” Salehi said in an interview with state TV on the sidelines of a visit to the Fordow nuclear facility.

Elsewhere in his remarks, Kamalvandi emphasized that Iran has presently no plan to stop implementing the Additional Protocol to the Nuclear Non-Proliferation Treaty (NPT) and is operating within the framework of the Additional Protocol and the Safeguards Agreement with the IAEA, but will notify the UN nuclear agency if it makes such a decision.

"For the time being, we have notified the IAEA that we are planning to raise the uranium enrichment capacity to 272,000SWU (separative work units) within a period of 15 years," the Iranian official noted.