TEHRAN, May 21-And researchers say the longer a woman breastfeeds, the more she may be able to reduce her risk. 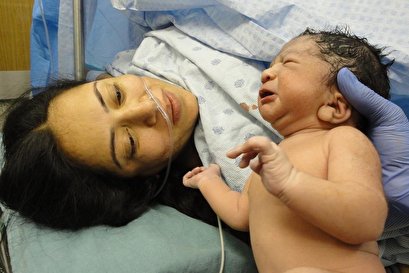 And the longer a woman breastfeeds, the lower the risk.

In the study, researchers assessed heart and blood vessel health in postmenopausal women, along with their breastfeeding history.

After adjusting for other factors that affect heart health such as body weight, age, cholesterol levels and smoking habits, the researchers concluded that women who had breastfed had significantly lower levels of heart disease and heart disease risk factors.

This reduction was greatest in women who had breastfed for longer periods of time, according to the study presented Friday at the European Society of Endocrinology annual meeting, in Lyon, France. Such research is considered preliminary until published in a peer-reviewed journal.

"These findings indicate that breastfeeding lowers the risk of heart disease in women. However, this is an association study only; we are now interested in looking at establishing the underlying causes of this protective effect," said study author Irene Lambrinoudaki, a professor at the University of Athens in Greece.

"If we can show causality for the protective effect, women will have one more reason to nurse their infants beyond the already documented benefits of breastfeeding for short- and long-term health of both them and their children," Lambrinoudaki said in a meeting news release.

Previous research has shown that breastfeeding reduces the risk of postpartum depression and the risk of certain cancers in women, and can help mothers maintain a healthy body weight and regulate their blood sugar.

These health benefits are likely to be related to the higher levels of the hormone prolactin in breastfeeding mothers, according to the researchers.

Recent studies suggest that prolactin reduces the risk of diabetes, which is a major risk factor for heart disease, a leading cause of death among women worldwide.

The researchers are now investigating the molecular mechanisms of how prolactin affects blood sugar. That research could reveal new targets in the prevention of heart disease for everyone, not just breastfeeding women.