TEHRAN, May 21-A team of United Nations investigators has unearthed 12 mass graves in Iraq during a probe into the atrocities committed by the Takfiri Daesh terrorist group in the Arab country. 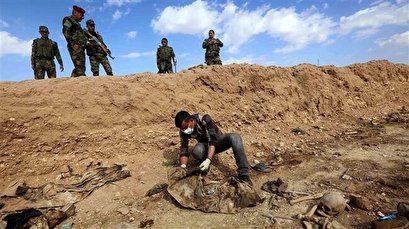 TEHRAN, Young Journalists Club (YJC) -The finding was announced in a report prepared by the UN team and sent to the United Nations Security Council, AFP reported on Monday, saying that it had seen a copy of the document, which has not been made public.

The Security Council authorized the establishment of the investigation team in September 2017.

According to AFP, British lawyer Karim Asad Ahmad Khan, the head of the UN team, said in the report that three investigations had been underway, namely the 2014 massacre of Izadi minority members, crimes committed in Mosul between 2014 and 2016, and the mass murder of Iraqi military recruits in Tikrit in June 2014.

In 2014, Daesh committed what the UN concluded was a possible genocide of Iraq’s Izadi community during its offensive against the northern region of Sinjar. The offensive forced tens of thousands of Izadis to flee the Arab country.

The 48-member team is also collecting witness accounts that could be used in Iraqi and other national courts.

According to the report, the investigators have “engaged first-hand with survivors and witnesses” and have implemented a witness protection program.

“In Mosul, Tikrit, Dohuk, and elsewhere in Iraq, victims have told harrowing accounts of their suffering, of entire communities erased and of women and girls taken as slaves,” it said.

The report further said that the team was negotiating pacts with Iraqi authorities to hand over evidence and was ready to provide material to other courts to hold Daesh terrorists accountable for their crimes.

Daesh began a terror campaign in Iraq in 2014, overrunning vast swathes of land. In December, 2017, the Iraqi state declared victory over the terrorist group. Pockets of Daesh terrorists remain active in the country, however.