When a nation loses identity, it melts in the palm of enemies

TEHRAN, May 21 - On the eve of the auspicious birth anniversary of the compassionate member of Prophet Muhammad’s progeny—Imam Hassan Al-Mujtaba (a.s.)—a group of professors of Persian language and literature as well as young and veteran poets met with Ayatollah Khamenei, the Leader of the Islamic Revolution, this evening May 20, 2019. 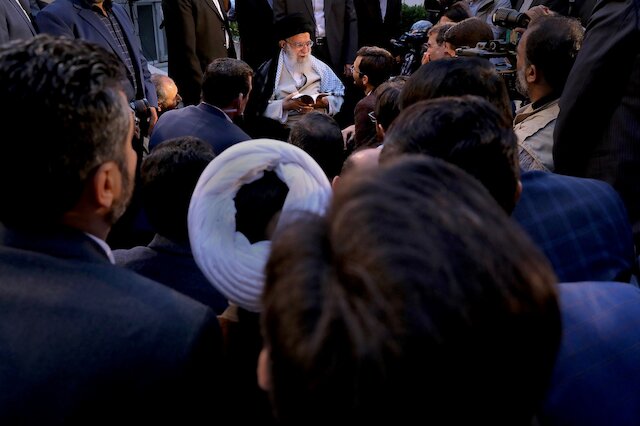 TEHRAN, Young Journalists Club (YJC) - In this meeting Ayatollah Khamenei described the progress of the revolutionary poetry as promising and held: Of course there are other poetical movements too who have significantly progressed in terms of notions, creative concepts and enhancement of the wordings.

The Leader of the Revolution regarded poetic expression and the phenomenon of poetry as a miracle of the creation and asserted: Poetry enjoys splendor and beauty aspects and this quality makes poetry an influential medium that brings about responsibilities devoted to serving the enlightenment and awakening movements.

His Eminence referred to a naïve paralogism that divided poetry to ‘artistic’ and ‘committed’, trying to devaluate committed poetry and maintained: Major poems and the peaks of Persian poetry like the works of Hafez, Sa’di, Ferdowsi, and Rumi are filled with concepts of morality, education, devotion, wisdom, mysticism, spirituality and pure Islam; hence, segregating the artistic and aesthetic aspects of poetry from its aspects of responsibility and commitment is an obviously naïve paralogism resulting from ignorance or lack of knowledge.

The Supreme Leader described devoting poetry to monotheistic teachings, the virtues of the Ahlulbait, the revolution and different important evens of the country and the world of Islam as enhancing and elevating poetry and added: Depict in your poetry the beautiful gestures by the nation, like the magnificent epic of people’s selfless volunteering in providing relief for the victims of the flood; because this makes your poetry a flag of the nation’s identity.

His Eminence went on to say: It is very important to safeguard a nation’s identity because once a nation loses its identity, they melt in the palm of enemies and perish.

The Leader of the Islamic Revolution elaborated: I am upset with the IRIB for they sometimes, instead of promoting an enhanced form of correct, standard and polished version of the language, promote an identity-less version with faulty expressions and worse—with foreign expressions.

His Eminence slammed frequent use of foreign words in the media and addressed authorities by saying: Do not allow the Persian language to be afflicted with erosion and destruction.

Ayatollah Khamenei also criticized poor and low wordings of some songs broadcast by the IRIB through TV series and held: The Persian language has been protected by great poets for centuries and the vigorous and eloquent version has been passed on to us; therefore, we should protect the language and do not allow that, out of ignorance and negligence, a naïve songwriter ruin the wordings and then his/her songs be broadcast by IRIB or other governmental and non-governmental media, using public money.

In this meeting, 29 young and veteran poets read out their poems to the Supreme Leader and the audience.

Before the Maghrib and ‘Isha prayers, a group of poets also talked closely with the Leader, presenting their works to His Eminence.