TEHRAN, May 25 -Asteroid 1999 KW4, measuring more than a mile in diameter and boasting its own moon, will fly by Earth on Saturday. Thankfully, the massive space rock will make its pass at a safe distance. 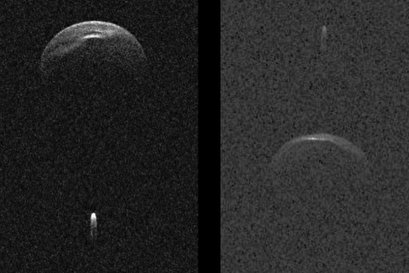 TEHRAN, Young Journalists Club (YJC) -"The asteroid will approach from the south, and the first day of visibility also coincides with the closest approach," NASA reported.

The asteroid will be visible from through June 7.

While the near-Earth object is classified as a potentially hazardous asteroid, there will be a cushy 3.2 million miles between Earth and the walnut-shaped space rock during its closest approach.

Observations during the flyby, made by radar instruments at the Arecibo Observatory in Puerto Rico, will help astronomers more accurately characterize the binary asteroid's shape and composition. Scientists will also study the asteroid using NASA's Goldstone Solar System Radar.

The asteroid's double-lobe shape is similar to the Bennu and Ryugu, the asteroids targeted by NASA and JAXA missions.

"This object will be the target of an extensive observing campaign supported by NASA's Planetary Defense Coordination Office," NASA reported.

The asteroid completes an orbit once every 186 days. This year's flyby will provide the International Asteroid Warning Network a chance to test its asteroid-tracking abilities.

"Even though we know 1999 KW4 poses no threat to Earth, because it comes so close, the idea is to use as many resources as possible to learn everything we can about it and really push our observing abilities to the limit," the Las Cumbres Observatory reported.

As its name implies, asteroid 1999 KW4 was discovered 20 years ago. It is one of the largest members of Aten class of space rocks, a group of asteroids that cross the orbits of Earth and Venus.