TEHRAN, May 27- Nigel Farage, the head of Britain’s eurosceptic Brexit Party, says he wants a place around the negotiation table hosting Brexit talks, warning of the consequences of him being denied this. 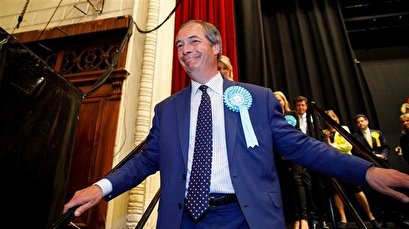 TEHRAN, Young Journalists Club (YJC) - He made the remarks to Reuters on Monday, a day after his party came first in the United Kingdom‘s European Parliament elections. “We should be part of the team now, that’s pretty clear,” he said.

Farage is known for capitalizing on populist approaches by wooing the working-class segments of the society, which feel shortchanged by the government. His campaigning features barnstorming the areas, which house the indignant grassroots, and delivering passionate speeches.

In 2013, when he was leading the similarly anti-European Union UK Independence Party (UKIP), he exerted so much pressure on former Prime Minister David Cameron that he promised a referendum on whether the country should remain in the EU.

The vote went underway in July 2016, with the public setting a March 31 deadline for the departure.

The deadline was, however, missed as London failed to strike a deal with the bloc on the status of bilateral relations following the separation.

Now, Farage has pushed the deadline to October 31.

"If we don't leave on Oct. 31 then the score that you have seen for the Brexit Party today will be repeated in a general election and we are getting ready for it," he said, referring to the party’s winning 31.7 percent of the vote in the European polls.

“Never before in British politics has a new party, launched six weeks ago, topped the polls in a national election,” he boasted about the results.

Members of the European Parliament, however, cannot directly influence British policymaking, and it will be the country’s prime minister, who decides the country’s fate.

The post of premiership has just been made vacant after Theresa May resigned earlier in the week amid an extended deadlock with Parliament over Brexit.

Observers say none of the candidates seeking to replace May are expected to offer an olive branch to Farage, considering him to be a longstanding rival and a deeply divisive figure.