TEHRAN, May 28- Sudanese people have launched a two-day nationwide strike to step up pressure on a ruling military council to transfer power to a civilian authority. 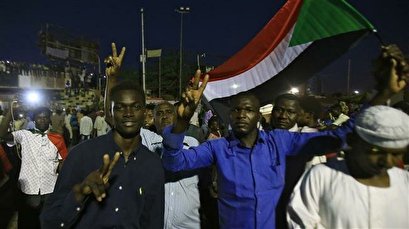 TEHRAN, Young Journalists Club (YJC) -The umbrella protest movement Alliance for Freedom and Change had called for a two-day general strike starting on Tuesday after talks with the ruling Transitional Military Council (TMC) failed to achieve a breakthrough.

Sudan’s ruling generals — who set up the TMC after ousting president Omar al-Bashir last month — and the opposition are at odds over the composition of a new governing body and whether it should have a civilian or military majority.

Many of the personnel carried banners or wore badges reading, “We are on strike.”

Sudanese airlines Badr, Tarco, and Nova canceled flights on Tuesday, although some international flights went ahead as scheduled.

Employees at Khartoum’s main bus terminal also participated in the strike. Many of them carried banners that read “Today, tomorrow no buses as we are on strike.”

Siddiq Farukh, a leader of the protest movement, told AFP that the strike action “aims to deliver a message to the whole world that the Sudanese people want a real change and they don’t want the power to be with the military.”

Addressing reporters late Monday, protest leader Wajdi Saleh said the protest movement was ready to negotiate if the generals offered fresh talks. But he also warned that the strikes could go on indefinitely if the deadlock continued.

One opposition body had however cautioned against such sweeping action.