TEHRAN, May 28 - The mourning ceremony of Imam Ali (PBUH) was held by tens of thousands of people at different cities of Iran, including Hamadan, Zahedan and Aran and Bidgol. 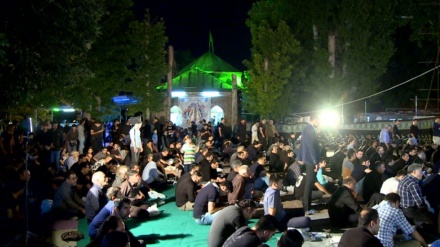 TEHRAN, Young Journalists Club (YJC) - On Sunday night, which was the second ‘Laylat al-Qadr’ -the night of destiny- people held the mourning ceremony for the martyrdom of Imam Ali (Peace be Upon Him) at different cities of Iran.

In Aran and Bidgol -a city near Kashan- lots of people gathered in the holy shrine of Hilal ibn Ali (Peace Be Upon Him), one of the sons of Imam Ali (PBUH) to mourn for Imam Ali (PBUH) and also pray for God's mercy, Iran Press Reported.

Imam Ali (PBUH) was the first Imam and the rightful immediate successor to Prophet Muhammad (PBUH) in Shia belief.

Muslims believe that on this night, the blessings and mercy of God are abundant, sins are forgiven, supplications are accepted, and that the annual decree of humans is revealed to the angels who also descend to earth, especially the Angel Gabriel, referred to as "the Spirit", to perform every and any errand decreed by God.