TEHRAN, May 29 -New data collected by the ROSETTA-Ice project, a three-year survey of Antarctica's largest ice shelf, suggests unique geologic formations beneath the Ross Ice Shelf dictate the inflow of penetrating ocean water, as well as the outflow of melting ice. 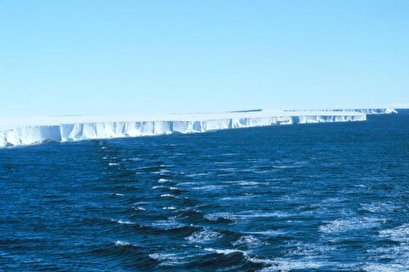 TEHRAN, Young Journalists Club (YJC) -The Ross Ice Shelf is a massive floating sheet of ice. It acts as a stopper, slowing the advance of interior ice toward the ocean. Without it, Antarctica's grounded ice would slip into the ocean, raising sea levels dramatically.

Because of its importance to the stability of Antarctica's interior glaciers, scientists are keen to understand the ice shelf's dynamics.

The Ross Ice Shelf is already melting at an accelerated rate -- 10 times faster than the global average, in fact. To better understand the interactions between ice, ocean, atmosphere and geology that define the Ross Ice Shelf, scientists with the ROSETTA-Ice project have been collecting data using a variety of instruments.

One of those instruments is a magnetometer, which measures Earth's magnetic field. Scientists used data collected by the so-called IcePod to model the contours of the seafloor beneath the Ross Ice Sheet. Their efforts revealed a unique formation in the middle of the ice shelf, a geologic boundary between east and west Antarctica.

"We could see that the geological boundary was making the seafloor on the East Antarctic side much deeper than the West, and that affects the way the ocean water circulates under the ice shelf," Kirsty Tinto, researcher at Columbia University's Lamont-Doherty Earth Observatory, said in a news release.

Researchers used their new map of the floor of the Ross Sea to model ocean circulation beneath the Ross Ice Shelf. The new simulations showed an ocean pattern called the Ross Shelf Polynya prevents warm water currents from reaching the Ross Ice Shelf for most of the year. However, the model also showed the ice shelf's leading edge is especially vulnerable to warm summer water

"We found that the ice loss from the Ross Ice Shelf and flow of the adjoining grounded ice are sensitive to changes in processes along the ice front, such as increased summer warming if sea ice or clouds decrease," Columbia senior scientist Laurie Padman said.

The findings, published this week in the journal Nature Geoscience, suggest unique geologic patterns can inspire seemingly small-scale ocean patterns with a significant influence on melt rates along an ice shelf's front lines.

"We found out that it's these local processes we need to understand to make sound predictions," said Tinto.