Trump admits that Russia helped him get elected, then quickly retracts

TEHRAN, May 30 - US President Donald Trump has acknowledged for the first time that Russia helped “me to get elected,” but quickly pulled backed from the idea. 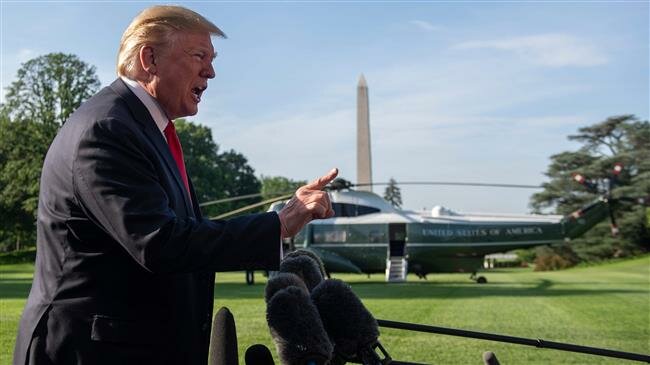 TEHRAN, Young Journalists Club (YJC) - The comment, a clause in one of several Twitter posts on Thursday, is an extraordinary admission from Trump, who has avoided saying publicly that Russia helped him win the presidential election in 2016 through Moscow’s alleged election meddling.

“No, Russia did not help me get elected,” Trump told reporters less than an hour after his Twitter post, as he departed the White House for Colorado Springs, Colorado. “I got me elected.”

Russia, Russia, Russia! That’s all you heard at the beginning of this Witch Hunt Hoax...And now Russia has disappeared because I had nothing to do with Russia helping me to get elected. It was a crime that didn’t exist. So now the Dems and their partner, the Fake News Media,.....

Trump has been reluctant to accept the findings that Russia was behind the 2016 election interference, and has consistently argued that he alone was responsible for his unexpected victory.

Trump has described the claims about Russian interference a “hoax” and one fabricated by Democrats who are angry they lost the White House to a Republican.

Trump’s contradictory statements came a day after US Special Counsel Robert Mueller, who recently concluded his two-year Russia inquiry, spoke publicly for the first time about his investigation’s findings.

In another tweet on Thursday morning, Trump called Mueller “highly conflicted” and repeated his accusations that the investigation was a “hoax” and that it amounted to “presidential harassment.”