TEHRAN, Jun 12 -The tracking strategy utilized by hawks could be used to capture rogue drones, according to a new study. 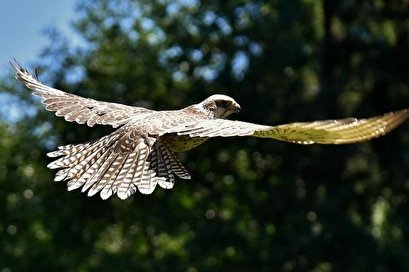 TEHRAN, Young Journalists Club (YJC) - Falcons track their prey a lot like a heat-seeking missiles honing in on a target -- they follow a streamlined trajectory, capturing airborne prey. But hawks must navigate more crowded environs and follow small targets that zig and zag across the ground.

Researchers at the University of Oxford wanted to decipher the guidance law that helps hawks track the erratic escape maneuvers of squirrels and field mice.

A guidance law informs an animal, missile, aircraft or other tracking device on how to move and turn to intercept its target.

To find out how a hawk's guidance system operates, scientists set up a system of high-speed cameras and filmed five captive-bred Harris' hawks chasing a prey-like target programmed to move unpredictably across the ground.

"Working forward from the start of the attack, we used a computer simulation to predict how the hawk would have turned under a range of different guidance laws, and identified which gave the best model of the data," Taylor said.

According to Taylor, natural selection led to the hawk's adoption of guidance laws that are better suited for hunting in a cluttered environment and tracking targets at close range.

The finding, published this week in the journal Nature Communications, could have implications for drone technologies.

"Part of our motivation for studying how hawks intercept targets was to find out how aerial hunters achieve the same functionality -- being able to grab a maneuvering target in a cluttered environment -- as technology requires to make a successful anti-drone drone," Taylor said. "In fact, the main grant that sponsors this work is on visually based guidance in birds and its applications to autonomous air systems."

Taylor and his colleagues are currently working with engineers and industry partners to develop drone interception technologies, and their latest prototype features wings that can change shape like a bird's wings.