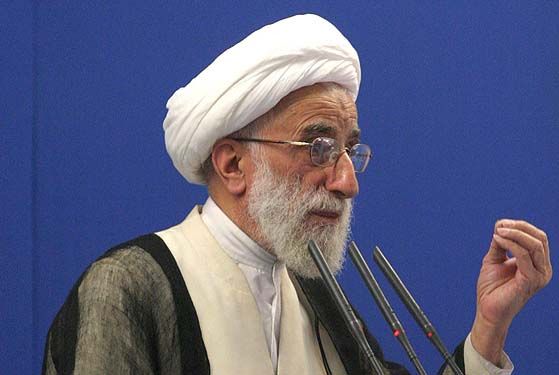 "I recommend that we use home-made goods for the sake of workers’ and people’s resistance economy,” were the words of Ahmad Jannati to the prayers in Tehran on Friday.

The Friday preacher said "Why do we hold out our hands like beggars? This is one of the things they mean by being dominated. If we use domestic products, production and job opportunities will naturally rise. This is a culture that needs to thrive. It is no pride to use foreign products, it’s rather humiliation. Of course producers also must take care to offer high-quality products with reasonable prices.”

Providing comments on international affairs, Jannati pointed to Egypt and said "The old Islamic country of Egypt has reached a point where a bunch of military men take control and remove the elected president by force.”

"Now they are going to execute 4-5 hundred people. They have sentenced 300 to life imprisonment. May God curse Americans. These are all their schemes. They overthrew that president; now we have to see how many Muslims are killed in the streets.”

"In Ukraine as well they come and bring about the same situations. They threw away the president chosen by people, much like Morsi, and appointed someone else. But it was a good experience; it boomeranged on them. They wanted to take over all of Ukraine, but what is happening right now is Ukraine undergoing disintegration. Americans burned their own fingers while someone else is taking the advantage,” he stated.

The ayatollah then pointed to developments in Iraq and said "There’s the Iraqi elections taking place. May God rid our Iraqi brothers of radical terrorists.”