TEHRAN, Jun 21 - The head of Georgia's parliament has quit Friday after more than 240 people were injured in a police crackdown on mass protests, which erupted over an address to lawmakers by a Russian MP. 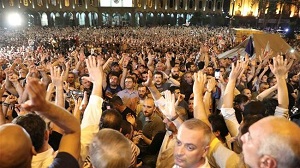 Rallies broke out in the capital Tbilisi on Thursday after a Russian lawmaker addressed parliament from the speaker's seat.

Police fired rubber bullets and tear gas at crowds, leaving at least 160 demonstrators and 80 officers injured according to the health ministry.

The use of force in the pro-Western ex-Soviet country has sparked an international outcry.

The Kremlin condemned the protests as "Russophobic provocation".

The presence of Russian MP Sergei Gavrilov in parliament brought a backlash in Georgia, which in 2008 fought and lost a brief but bloody war with Moscow over the breakaway regions of Abkhazia and South Ossetia.

With parliamentary polls set for next year, opposition groups are also seeking to capitalize on discontent with the ruling Georgian Dream party and its oligarch leader Bidzina Ivanishvili over the failure to kick-start a stagnant economy.

The United Opposition alliance has demanded snap parliamentary polls and the resignation of the interior minister.

"Peaceful mass protest will continue until these demands are met," its leader Grigol Vashadze told AFP, adding that a fresh rally would start at 7 p.m. (GMT 1500) on Friday.