Many pregnant women fail to get the right level of nutrients

TEHRAN, Jun 22 -For pregnant women, good nutrition is essential for their health and the baby's health. But many aren't getting adequate amounts of the vitamins and minerals they need, a new study finds. 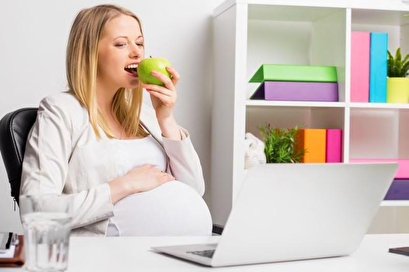 TEHRAN, Young Journalists Club (YJC) -On the other hand, some of actually taking higher levels of nutrients than is healthy, the same research reports.

And almost all are eating too much salt.

"Many pregnant women do not consume enough of key nutrients: specifically, iron, potassium, calcium, magnesium, zinc and vitamins A, C, D, E, K, B6, folate and choline -- even with the use of dietary supplements," said lead researcher Regan Bailey. She's an associate professor of nutrition science at Purdue University in West Lafayette, Ind.

"It appears that supplements may be necessary for most pregnant women to meet nutrient recommendations," Bailey said. "However, our findings suggest that responsible formulations of prenatal products could help women achieve recommended intakes without the potential for excess."

For the study, Bailey and her colleagues collected data on more than 1,000 pregnant women 20 to 40 years old who took part in the U.S. National Health and Nutrition Examination Survey from 2001 to 2014.

The researchers found that nearly 70 percent of the women were taking prenatal dietary supplements. But based on the recommended levels of the National Academies of Sciences, Engineering, and Medicine Dietary Reference, some weren't getting enough and some were getting too much.

Others were getting too much potassium, vitamin K, folic acid, iron, calcium and zinc.

And 95 percent were consuming too much salt.

"Whether it's consuming too much salt or not getting enough of some minerals and vitamins, not adhering to recommended standards is a significant problem," said Dr. Rahul Gupta, chief medical officer at the March of Dimes.

Taking too much of some vitamins and minerals can be harmful, he added. For example, vitamin Bs can build up in the liver, causing it harm. Too much iron can also result in damage to the liver, heart and pancreas.

Having too little of some vitamins can also hurt women and their infants. For example, having enough folic acid has been shown to help prevent birth defects called neural tube disorders, which can affect the brain and spine, said Gupta, who wasn't involved with the new research.

"During pregnancy, it's critical to have a nutrition discussion with your doctor," he said. That talk should include what supplements the woman is taking and what fortified foods she's eating.

In addition, women need to tell their doctor what additional nutrients -- such as herbal supplements -- they are taking.

"That, along with lab tests, allows the doctor to provide the best informed recommendations for the patient," Gupta said.

It's even better if this discussion takes place before a woman gets pregnant, he added.

Gupta's main concern is with the amount of salt pregnant women are consuming. "We know there is a direct correlation between salt and high blood pressure," he said.

Hypertension during pregnancy can lead to preeclampsia, a pregnancy complication resulting in high blood pressure and damage to liver or kidneys. This can result in premature birth, Gupta said.

"It's critically important to make sure high blood pressure is controlled," he said. "But if the woman is taking in too much salt, it can affect outcomes for the woman and the baby."

The guidelines are well-known, Gupta said, but they need to be compared with what a woman is actually taking.