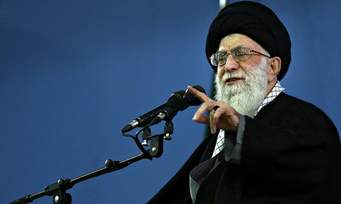 Ayatollah Khamenei addressed national independence and said "If we focus on domestic capabilities neither the US nor other powers will be able to do a damn thing. The Iranian nation will not succumb.”

Stressing the need to activate potentials home he said "It is under such circumstances that the country will thrive in material, spiritual, and ethical terms as well as in international prestige and pride. It is in that case that the country will get rid of the arrogance of foreign enemeies.”

Blasting critics who challenge the idea that the Islamic government is given the duty to lead people to heaven he said "The duty of the Islamic governor is to take people to real happiness, which does not mean to use force and to make people do things, but rather to prepare the grounds for people to do so based on people’s instinctive inclination to happiness.”

"Imam Khomeini realized the truth when he said ‘The US cannot do a damn thing,’” ayatollah Khamenei asserteed, adding "If we set domestic potentials into action and focus on domestic capabilities, neither the US nor other powers will be able to do a damn thing, be it military or otherwise. They won’t be able to ground the Iranian nation by force.”