Despite fears to the contrary, North Korea does not appear to be preparing an imminent nuclear test, a US think-tank said Wednesday in an analysis of recent satellite images of Pyongyang's main test site. 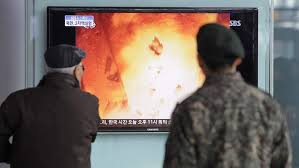 While the latest pictures dated May 9 do show high levels of activity at the Punggye-ri site, most of it seems to be of a mundane, routine nature that would not be consistent with an impending test, the US-Korea Institute at Johns Hopkins University said.

In an analysis posted on its website 38 North, the institute offered several scenarios, including the possibility that Pyongyang had been pushing towards a test but was warned off by its main ally and economic benefactor, China.

"Based on available evidence... it appears that a nuclear test is not imminent," the analysis said.

"Indeed, given previous North Korean practices, one possible conclusion is that if the North is planning a test, it may still be weeks away," it added.

The international community has been on edge for a month after South Korea cited intelligence reports that the North was planning to conduct its fourth nuclear test -- possibly to coincide with US President Barack Obama's visit to Seoul in April.

Subsequent satellite analysis by several think-tanks confirmed stepped-up activity at the Punggye-ri site, but most stopped short of predicting a detonation timeline.

And 38 North stressed that its conclusions were based, as with all forecasts of North Korea's future behaviour, on limited information about a highly unpredictable regime.

"Of course, the North Koreans could test tomorrow," it said.

"But after a month of crying wolf, it appears the odds-on favourite now is that a test is not imminent and in fact, may be some days, weeks or even months off."

In a joint press briefing with Obama during his Seoul visit, South Korean President Park Geun-Hye warned that another test would "fundamentally change the security landscape" in Northeast Asia.

In remarks aimed as much at Beijing as Pyongyang, Park said a fourth detonation would "completely dissolve" the prospect of returning to six-party talks that China wants to revive, which are meant to offer North Korea aid in return for dismantling its nuclear drive.

The 38 North analysis suggested the North may have been planning an imminent test but cancelled "at the last minute" as the result of Chinese pressure to hold off.

It offered other scenarios, including the possibility that an impending test had never been on the cards, and the stepped-up activity was just post-winter maintenance work.

Or Pyongyang may have just been simulating test preparations to get attention.

"Of course we may never know if any of these explanations is correct," the institute said.
AFP
Share to
Tags
North Korea ، nuclear ، test ، Johns Hopkins
Your Comment