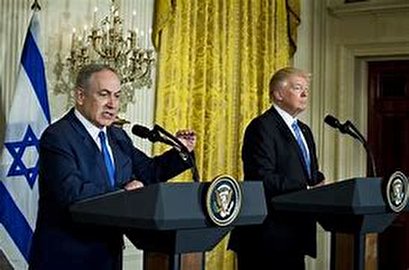 TEHRAN, Young Journalists Club (YJC) - The US Departments of State and Treasury announced the imposition of sanctions on Wednesday against Zarif stating he “acted or purported to act for or on behalf of, directly or indirectly, the Supreme Leader of the Islamic Republic of Iran.”
In June, Trump announced new sanctions against Iran targeting Leader of the Islamic Revolution Ayatollah Ali Khamenei and top commanders of the Islamic Revolution Guards Corps (IRGC).
“The most recent act by the United States towards Iran is the imposition of economic sanctions against their Foreign Minister Mohammad Javad Zarif. This threat is likely toothless since Zarif claims to hold no financial assets outside of Iran. The basis of this latest jab thrown by the United States is to target a diplomat who has called for the world to ‘look at the realities on the ground’  instead of believing the twisted lies and propaganda spewing from Western information outlets that seek to promote and justify war against Iran,” Peretto said.
“Zarif has been building a reputation around the world as an articulate and clear voice for truth, and this has brought about a number of retaliatory responses from those who seek to further the globalization agenda to end national sovereignty for all nations in favor of a one world system,” he told Press TV.
“Even though these toothless sanctions are coming from the US State Department -- Zarif has stated that he believes ‘The United States is not serving US interests -- it is serving Israeli interests and (those) who have aligned themselves with Israeli interests’ naming John Bolton of the US, Netanyahu of Israel, and bin Salmon of the House of Saud,” he stated.
“Israel… drives US foreign policy. Israel was the key foreign player behind the 9/11 attacks that fostered the US led invasions of Afghanistan and Iraq and is now directly and indirectly causing chaos in Syria, Yemen, Libya, the Sudan, and elsewhere. The Western controlled media continues to portray Israel as an ally of the United States and Iran as a threat. If one objectively looks at the realities on the ground--one will clearly see that Israel and its founding families and associates have an economic, political, informational, and academic grip on American society and its foreign policy,” he noted.
“Many Americans have died since the first plane hit the Twin Towers on 9/11 and carnage continues with the ongoing phony war on terror promoted by the controlled Western media. It is the West that is behind ISIS (Daesh) and the instability in the Middle East. It is Western leaders and their mouthpieces who are pathological and paid liars. It is the West that seeks the breakdown of national sovereignty around the world and the creation of a one world tyranny,” he said.
“It is the West led by Israel and their banking associates in London backed by the muscle of US military that is ever ready to spill American blood for the agendas of organized psychopaths. It is the West that is the threat to peace and freedom around the world. It is the West that has stockpiles of nuclear weapons to enforce its will---while making sure that Iran never has a tactical advantage of fully defending itself,” he said.
“And I want to add that 9/11 came as a surprise to the world and had the effect of shock and awe. Also the popular internet age was generally in its early years. Today, light has been shed to some degree on the policies of the West and its aggression. While the sociopolitical psychology of the common people remains to some extent disinterested in the inner workings of the New World Order agenda, there are enough people paying attention now to slow down America's belligerency toward Iran,” the analyst said.
“The result has been wave after wave of sanctions, threats, occasional hints at diplomacy, and disinformation designed to wear away at Iranian sovereignty and its ability to defend itself. It's time to expose the Western propaganda networks for what they really are, and tune into the realities on the ground and the reality of the Western one world agenda,” he concluded.
Source: Press TV